The Great Pyramid of Giza / Egypt

Undoubtedly the most enigmatic megalithic monument on the face of the planet, The Great Pyramid is an ancient stone structure mired in controversy. Who built it? When was it built? And why? Theories abound on practically everything, ranging from the orthodox through to the fantastic. That being said, the objective mind cannot help but conclude that the truth does indeed strongly tend towards the latter. 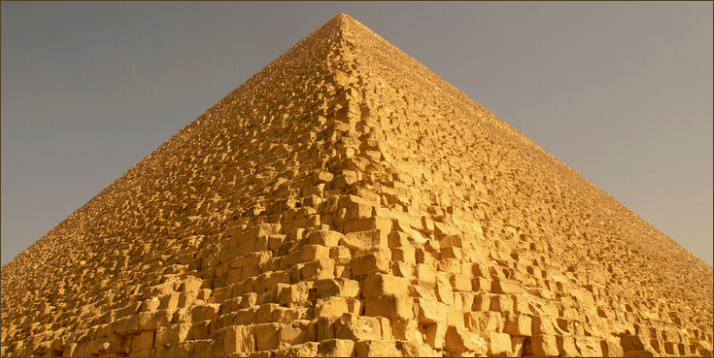 To date, practically all of the orthodox theories concerning The Great Pyramid have been discredited. It was never a tomb for the Pharaoh Khufu. It was not built by a slave worker force over some 20 years using just copper tools. The large blocks used to construct the pyramid – some 2.5 million – were not carried over hundreds of miles to Giza by brute force.

All of these notions have been categorically debunked as nonsense. What rigorous studies have been done of The Great Pyramid though, have not only destroyed such mainstream ideas, they have led to certain inescapable conclusions. In summary, they are as follows:

1) The Great Pyramid was some sort of advanced high tech device built to interact with certain natural energy fields surrounding the Earth.

2) It was likely built well before the generally accepted date circa 2500 BC. Perhaps even several thousand years prior.

3) The structure was built either entirely by humans – being a part of some unknown advanced global civilisation – or by extra-terrestrials, or perhaps both working together. Regardless of which, it could never have been built by simple ‘stone-age’ man, or hunter-gather type tribes.

The Mystery of The Great Pyramid of Giza

Here then, I offer a selection of essays detailing my own personal breakthroughs in studying The Great Pyramid. Highly original research which strongly supports the position that the structure was indeed a high tech device of some sort. A Giza Power Plant if you will:


1. The Chosen Site of The Great Pyramid


A precise evaluation of the global placement of The Great Pyramid based upon the most advanced Earth ellipsoid model (WGS84). Here I offer a precise proof that the latitude placement of the structure indicates that it was set with respect to a special ratio. A numerical value intimately related to the Earth’s Tropical year value: 365.2421897 days. This proves the builders of The Great Pyramid possessed a working model of the Earth to a standard of accuracy on par with that of the modern age. Impossible according to orthodox theory, but absolutely confirmed.


2. Earth Resonance & The Great Pyramid as a Power Plant


A powerful and exacting mathematical proof that the base dimensions of The Great Pyramid were selected to achieve a harmonious relationship to the Earth’s own dimensions. Specifically with respect to the elliptical arc measure up from the Earth’s equator to the latitude of the structure (29 deg. 58 min. 51 sec. North). The type of relationship established provides strong evidence that via the physics of resonance, the Giza pyramid was built as a device to ‘draw power’ from the Earth.


3. Secret Chambers within The Great Pyramid


An evaluation of some of the hidden chambers or ‘voids’ within The Great Pyramid which have only recently been detected by advanced (Muon particle) scans. In this instance, the research is considered alongside the work of Edward Kunkel. An engineer whose study of the placement of the internal chambers of the pyramid supported the idea that it functioned as a giant pump.


4. The Casing Stones Covering the Pyramid


A short evaluation of the casing stones that once covered The Great Pyramid whilst in pristine condition. In this instance, with respect to their chosen number: 144000. Here I look at some of the numerical values and ratios associated with the casing stones of the pyramid, which are also to be found in other aspects of nature.