144000 Casing Stones of The Great Pyramid of Giza 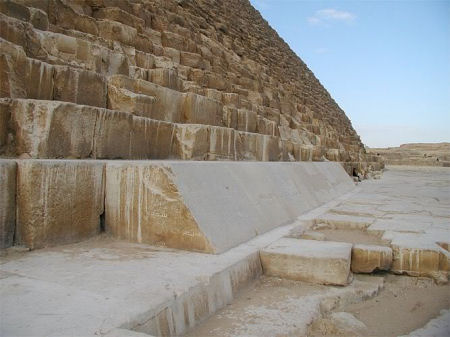 When originally constructed in ancient times the surface of The Great Pyramid of Giza was covered in highly polished Tura limestone blocks. Carefully interlocked, the blocks gave a uniform smooth surface to all 4 sides. The whole structure shining brilliant white in the light of the reflected sun. Now in 1300 AD, a great earthquake struck the Giza region loosening the outer casing stones, causing many to fall off about the base. Bahri Sultan An-Nasir Nasir-ad-Din al-Hasan, at the time, then salvaged them for various projects nearby, including the building of Mosques and fortresses.

Based upon what few remaining casing stones have survived, it has been possible to reconstruct the pattern as encompassed the pyramid in its original state, to determine what would have been the total number of casing stones as once covered the structure. The number is question is 144000.

Now it is very intriguing to note also that the numeric sequence as begins 144 has yet an additional link to The Great Pyramid, over and above a reference to just its original number of casing stones. And this, is by way of the ratio between the arc length distance up from the equator to the pyramid, and the side length of the structure:

Now in terms of evaluating the strength of the relationship, one may note that the level of error is very small indeed. Only a minor repositioning of the structure or slight alternation to the surveyed base side length of the pyramid would generate a perfect 14400 / 1 ratio. In light of this association then, the chosen number of casing stones appears to have been set at 10 times the value of the ratio between the latitude arc of The Great Pyramid and its base side length.

The number 144000 is not just found to be linked to the number of casing stones in an ancient megalithic pyramid. Indeed, it is also found to be associated with Biblical prophecy, Mesoamerican calendar systems, and astronomical cycles. And this includes basic numeric derivations beginning with the sequence 144. Consider the following selection:

In the book of Revelation (Apocalypse) the servant of God John is given a series of visions of the earth being subject to extreme devastation in some far off future age.

In one such vision a command is given to four angels who have been given the power to harm the land and the sea:

“Do not harm the land or the sea or the trees until we put a seal on the foreheads of the servants of our God.” 4 Then I heard the number of those who were sealed: 144000 from all the tribes of Israel.”

An ancient calendar stretching back thousands of years, the Long Count was developed by the Maya to track extremely long periods of time. In order, the names of the primary units and their duration are given in the image to the left.

One can see then that the largest cycle of the Long Count is the Baktun at precisely 144000 days, equal to approximately 394.25 years.

The Orbit of Ceres

Between the planets Mars and Jupiter there is a debris field of rock commonly known as the asteroid belt; a widely dispersed field populated by objects ranging in size from several hundred miles in diameter down to dust. 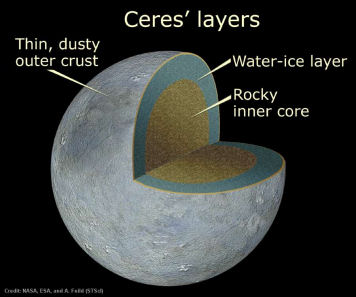 One object however stands out as being far greater in size than all others: Ceres. Unlike the other larger fragments of rock that compose the asteroid belt, Ceres is itself classed as a dwarf planet. And this is due to the fact that it is a true spheroid in shape – not merely a jagged edge piece of rock. Moreover, Ceres alone comprises 25% of the total mass of the asteroid belt. It is indeed the largest single object within the field, with an orbital period of some 1680.089 days. Now in my book, The Lost Age of High Knowledge, I present a comprehensive and exacting proof that the main bodies of the solar system were once in an ideal configuration. At such a time, the earth possessed exactly 360 days per year.

Moreover, in the ordering of the system, the planet Ceres possessed precisely 4 times the ideal earth orbital period:

The proof as detailed in my book is very decisive in demonstrating a connection between the numeric sequence of 144 and an actual astronomical body.

In the realm of mathematics there exists a special numeric sequence found to generate a very important ratio, known as the golden ratio. The sequence is named after Leonardo Fibonacci, who detailed its progression in his book Liber Abaci in 1202 AD:

The precise formula that expresses the ideal is:

As part of the numeric sequence one can see the presence of the key value 144 as part of the generation of the Golden Proportion.

In many areas then the numeric value of 144 can be found. It is linked not just to ancient megalithic structures such as The Great Pyramid in terms of its latitude positioning and casing stones. But variations are also found in astronomical cycles, ancient calendar systems, Biblical prophecy, and even the very unfolding of life. It is a number of great occult significance.