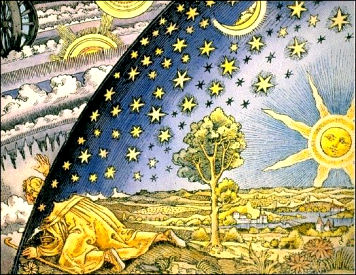 In the present 'Age of Reason' the reality of an Occult Science is for the most part rejected out of hand. The very notion an object of scorn to the mainstream scientific community - and this, because we are supposed to have grown up.

With the empirical method now ruling supreme, it has finally been 'proven' once and for all that the occult practices and ancient magic of the past were never real; never efficacious. It was always a superstitious nonsense worthy of a backward era. Or was it? Going beyond mere mainstream appearances, the full truth of the matter is that the elites have always known that occult science is real.

Indeed, many of the persecutions throughout Europe from the middles ages up to the present were an attempt to prevent the masses from accessing such ancient secrets; the very aim being to deny them personal self enlightenment.

It has always been about control. Of elite secret societies carefully guarding the occult science of the past in their desire to hold the keys to the kingdom. Only for their own benefit do they wield the high knowledge. That which they give to the masses is but a shadow serving only to strengthen the position of the rulers. And for those who stray, seeking their own answers and uncovering the falsehoods of the authorities, persecution and execution is their allotted fate.

Following the rise of science, there has been a marked shift towards convincing the people at large that occult practices of the past were never based upon true physics; that they were never efficacious and that it was all just 'mumbo jumbo'. All of it must be dismissed, including the use of talismans, consulting astrological charts, ancient magic rituals from the past. In the current age, all such related activities have been forcibly branded as anti-scientific, and therefore a fraud. This indeed is the official policy of the authorities of today.

Of course, the true rulers know full well that such a policy is a based on a lie.

It is their desire to control the masses that leads the authorities of the current era to propagandise the people that occult rituals and practices are 100% a fraud. All the while however they know full well that occult science is real, and within the circles of their secret societies they clandestinely practice certain elements of it, as indeed befits their nature. Moreover, at the same time as openly claiming the scientific method has invalidated the occult, they covertly use it to explore the occult.

Indeed, the scientific method is actively being used to reconstruct the ancient secrets of the past, revealing both the hidden history of mankind and the true physics behind occult magic. All carried out in near total secrecy.

A New Perspective on Ancient Secrets

Consider a series of ancient mysteries and occult magical practices in view of certain modern breakthroughs in science and technology:

In the 16th century the noted seers Nostradamus and Dr. John Dee were sought out by high nobility, including European Royalty. The occult science they practiced included divination, forecasting the future through ritual magic, and even communication with other-worldly beings. The technique usually employed was known as Scrying, which involved the practice of looking into a translucent material such as a crystal ball to perceive visions. Such could be of this realm or others. Of the past or of the future. And even involve contact with other entities.

Now there are those today that may doubt that such men had command of any special powers, or that anyone could achieve such feats by any known technique. How curious then that in the modern age vast sums of money have been spent on secret military projects to study human psychic abilities. And that these projects made decisive breakthroughs in tapping into what can only be described as supernatural powers. The astounding success of Remote Viewing serves as just one example.

Using controlled scientific protocols it was found that almost anybody could be trained to project their consciousness to other places (even dimensions) or times, to view and report on what they saw. Remote viewing is recognised today scientifically as a valid procedure, and is used regularly even now for espionage purposes. Indeed, it was originally developed for spying in the first place during the cold war.

Perhaps with their own occult science, Nostradamus and Dr. John Dee were the remote viewers of their day.

Not so very long ago communication with non-human intelligent entities implied angels or demons. In some traditions nature spirits. In 1947 however the modern UFO era exploded onto the scene with the Roswell Crash, at the same time as space exploration itself began to enter the popular mind. Shortly afterwards, the 'abduction phenomenon' then began. Something new, or at least thought to be so at the time, as indeed the initial explanation for such contact experiences was put down to extraterrestrial beings visiting from other planets.

Now over time, as more and more UFO abduction cases surfaced, the realisation struck a number of well respected researchers in the field that they in fact paralleled ancient encounters with demonic entities. Essentially, in the modern era of high technology and flight, new terminology was simply being used to describe something that was very old.

Moreover, the initial theory that the aliens were beings from other planets itself began to weaken in favour of what many regard as a far more plausible explanation: that they are beings visiting from other dimensions. Indeed, advanced studies in quantum mechanics are just now beginning to model such dimensions, and explain how one might move between them.

One interesting example of the linkage between ancient demonic activity and modern day 'alien' visitations can be had from the activities of no less a figure than the infamous occultist Aleister Crowley.

In 1919 in Greenwich Village New York at his Dead Souls exhibition, he included a drawing of a most curious entity; a contact from a magical working conducted in 1918 known as the Amalantrah Working. Operating through a medium, the entity was revealed through a series of magical visions.

Following this, Crowley went on to actually assign a name to it: LAM.

It is uncanny that the LAM entity drawn from an occult magical working is a close match to later drawings of entities associated with ET encounters.

An Ancient Energy Grid & Advanced Knowledge of the Earth's Dimensions

An enduring mystery of the ages, immense megalithic structures from a time long past are to be found scattered over the whole earth. Incredible feats of engineering even by today's standards. The Great Pyramid of Giza and Stonehenge are two of the most prominent examples, though they stand among many.

Stories passed down from ancient times relate that such monuments were constructed on special 'power points' upon the earth, and that many structures were deliberately build both in harmony with one another, and also the dimensions of the earth itself. Indeed, ancient traditions tell of sacred geometrical patterns connecting up many key sites, and that natural energy or ley lines flow through them forming an elaborate web. A global energy grid. 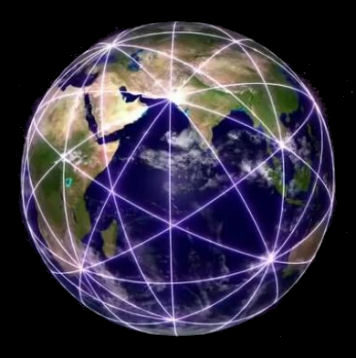 With the advance of civilisation in the modern era came the ability to map the earth to extreme accuracy. And so achieved, when the megalithic monuments were evaluated under our most advanced earth model (WGS84) a remarkable finding was to be had. These ancient structures were found to be connected to one another using basic mathematical / music ratios - linked even to the true and exacting dimensions of the earth form itself. The occult science of sacred geometry appears to have actively guided the builders.

So accurate were the relations uncovered that one is forced to admit, that whoever built these monuments knew the dimensions of the earth thousands of years ago to a standard equal to that of the present age, as only recently determined with high technology. Such a finding flies in the face of the orthodoxy.

Now high precision global placement and the linking of ancient structures is one thing. But to find that some of the most sensitive military-intelligence facilities of the current era have also been sited to reproduce the same types of mathematical relations, is absolutely astounding (see image below of the Menwith Hill and Pine Gap US bases as connected). Such modern complexes as embody these mathematical associations are said to be part of a global surveillance network run by US Intelligence, codenamed: Echelon.

Echelon sites are high tech bases involved in information transfer on a global scale, including satellite uplinks. Their operations depend on scalar-wave technologies. And each of the sites communicate through resonant waveforms that carefully interact even with the earth itself. The global placement of these sites was absolutely necessary in order to achieve proper a functioning worldwide network. An ancient esoteric occult science truly has thus been rediscovered and re-engineered by the ruling powers of this present age. 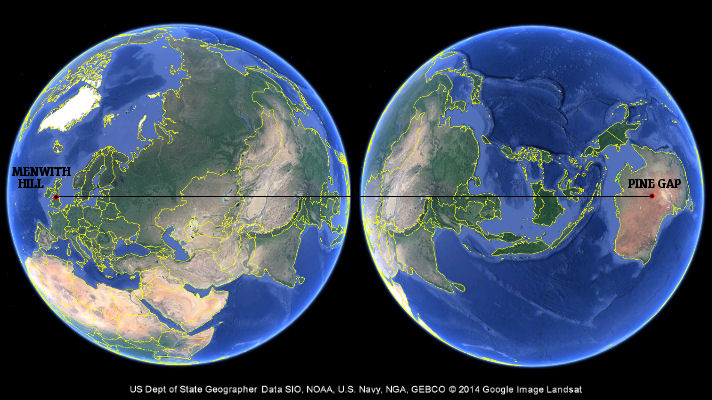