The Great Year cycle is one of the deepest mysteries within the esoteric realm, being intimately associated with both sudden highly destructive earth changes, and the spiritual transformation of the planet.

Within the arcane literature it is usually linked to both precession and The Pleiades Star Group. The most dominant view being that one complete Great Year is equal to a full precessional cycle, at some 25770.53 years in length.

Such a simple position is however grossly in error. For although there is indeed a precessional component to the Great Year, the interval itself is derived from a very specific planetary conjunction pattern. A highly exacting celestial alignment that does not harmonise with a simple precessional cycle.

The true time interval of the Great Year cycle may readily be had by examining past instances of sudden global upheaval, revealing that some of the most prominent just so happen to coincide with a very rare conjunction pattern; being the foundation of the entire cycle.

In this instance, for the decisive breakthrough to be had, one need only consider sudden earth changes that have afflicted the planet going back to the end of the last Ice Age, some 13000 years ago.

A list of some of the most noteworthy over this time period are as follows, each of which were discussed in detail in the previous article: 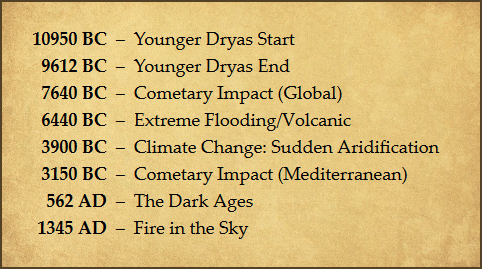 Clearly one can see from the list that not all of the events are of the same type. In some instances the Earth would appear to have been struck by a comet, or fragments of a comet from space. At other times it was subject to extreme seismic or volcanic activity, including flooding. Further to this, some of the dates in question appear only to mark out sudden climatic changes i.e. an increase in temperature leading to aridification.

As a result of these differences one might thus be forgiven for thinking that they are all unconnected. That is not the case however, as in point of fact there is a single cause behind them all. An identical trigger event: a very specific conjunction pattern which is periodically established within the solar system: A rare pattern that has a certain very special irregular cycle.

It is a pattern that is recorded in many ancient esoteric texts, be they religious or classed as mythological. It is essentially the master mystery pattern causing disaster to the Earth; being the Great Year cycle in question.

To give a Lord of the Rings analogy. Just as there is one ring to rule them all, there is one conjunction pattern that ranks higher than all others, being responsible for triggering earthbound disaster. It is essentially the core pattern behind many of the Earth's greatest disasters, including all of those previously detailed, above.

The Complex Sub-Cycles of The Great Year

Here one may view a diagrammatic representation of the specific conjunction pattern in question, which I refer to as the world age ending celestial configuration. 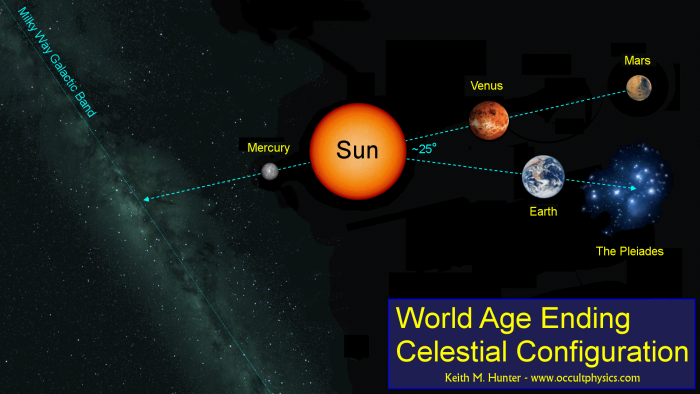 As depicted (above), the critical configuration involves two separate alignments, offset from one another by some 25 degrees:

1) An alignment of Mars, Venus, the sun and Mercury, targeting close to the
galactic centre, (from the viewpoint of Mars).

2) The Sun, the Earth and the Pleiades star group. 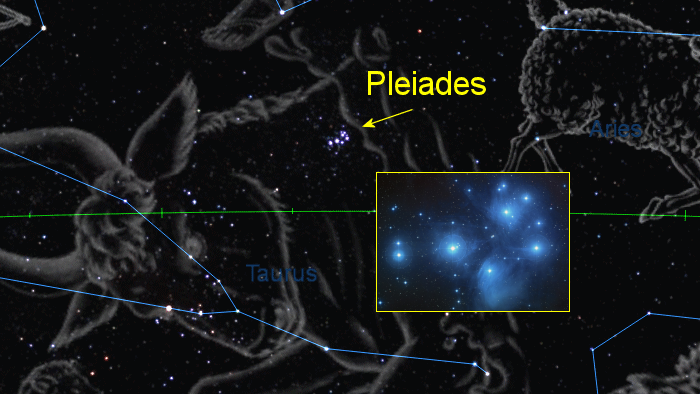 Here one should note that the Pleiades itself is not a constellation as such. It does not sweep out some 30° of the sky as the other major consolations are wont to do. It is in fact a very compact group of nine stars which sweep out only some 1° of the sky. Consequently, the star group has a very precise position in the heavens.

Now if we analyse in detail the specific configuration, we find that it has a very distinct irregular cycle: 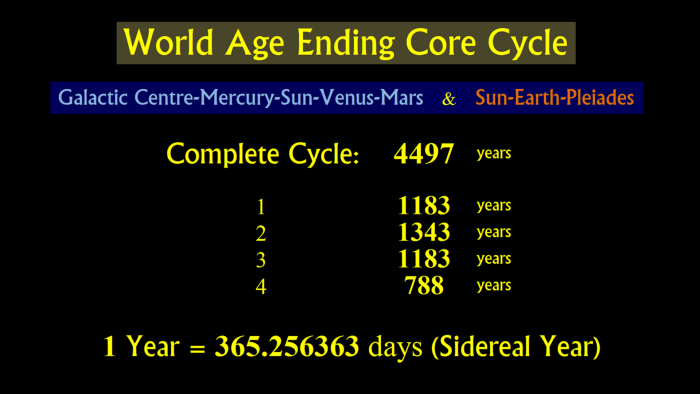 We may note then that one complete cycle is to be had every 4497 years. That is to say that every 4497 years we will always get a repeat of the pattern. That being said, within this time period there are four distinct sub cycles.

In this instance, the first sub interval is 1183 years. This is the length of time that has to pass before the next instance of the configuration. After this, the alignment pattern next occurs after 1343 years. Following this, the pattern then manifests again after 1183 years, before finally occurring once more after 788 years.

Adding up all of these four sub intervals of time, one has a complete cycle of 4497 years. Of course one must note that these are not standard tropical years, but rather sidereal years.

This is due to the fact that the alignments of the planets coincide with the background star field (i.e. The Pleiades specifically in this case), and thus precession must be taken into account, which of course necessitates the use of sidereal years.

With all of that said, all that we have here at present is simply an evaluation of the alignment itself, in terms of its periodicity. The next step is to actually look at the solar system, at all of the dates in our past history when this particular alignment occurred.

And herein, one may also go forwards in time, seeking out future instances of the conjunction pattern.

Here (image, left) you can see all of the sub intervals given in blue in the column on the left, with all of the years when the conjunction pattern actually occurred, noted on the right.

With this table completed then, all that remains is to compare the dates given here with those of the various global disasters, or extreme environmental changes, as detailed previously. This gives the following: 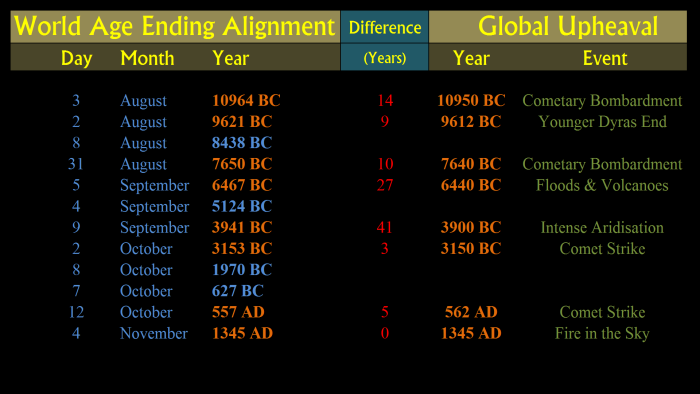 On the left we have the precise dates of the alignment as modelled from astronomical software. In this case Starry Night pro 6.0, specifying the exact times when the alignment achieved its optimum pattern.

To the right we have the best dates as scientifically determined for the extreme global events, as listed at the beginning of this article.

Here one can see then that of the past 12 instances wherein this configuration is manifest in the heavens, on eight of those occasions the Earth has suffered extreme upheaval in one way or another. The close matches are given in orange, with the differences in terms of years in red.

Now one can see how accurate the matches are. On the order of either just a few years, or just a few decades.

On account of the correspondence then, it is thus suggested that the conjunction pattern in question was indeed somehow an active trigger for the noted disaster events, even though, qualitatively speaking, the disaster themselves do not appear to be of the same type.

Indeed, one does have to wonder just how exactly a conjunction pattern could trigger such a wide variety of different effects. The answer is to be had from a careful examination of some of the most exotic phenomena associated with comets, as observed in the modern era.