Moving away from his New York laboratory to an open prairie in Colorado Springs, Tesla now had the space and the privacy necessary for a series of far larger and more elaborate experiments. The specific site chosen offered free land and electricity from the Colorado Springs Electricity Company. In addition to which, at an altitude of just over 6000 feet, the air in the region was much thinner and also more conductive, as indeed was the ground. Moreover, the chosen site was prone to large lightning storms, which Tesla also sought to study. All in all, it was an ideal location. 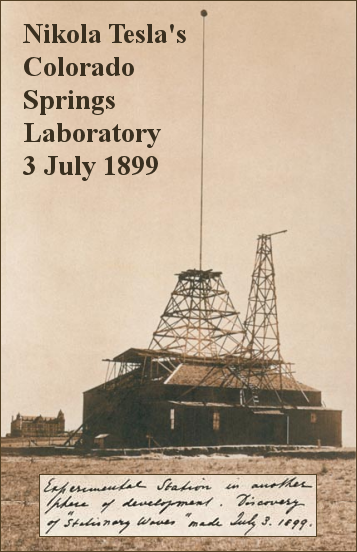 Arriving in the area in mid-May of 1899, Tesla and his two assistants, Fritz Lowenstein and Kolmon Czito, took up residence at the Alta Vista Hotel whilst construction began on the laboratory itself. The primary design was for a main building 50 by 60 feet with an 80 foot high internal ceiling. Central to the building was a 142 foot high conducting aerial topped off with a 30 inch wooden ball covered in copper foil. Internal to the laboratory was an extremely large Magnifying Transmitter  52  feet in diameter. Also, a slightly modified Tesla Coil, as was capable of generating millions of volts of electricity, in addition to being able to produce lightning bolts greater even than 100 feet in length.

During his stay between 1 June 1899 and 7 January 1900, Tesla kept a very detailed diary of all the experiments he carried out. Upon completion it consisted of some 500 pages and 200 drawings.

In studying the ionosphere and the Earth’s telluric currents via both transverse and longitudinal waves, Tesla sought to understand the processes governing the wireless transmission of signals, messages, and power itself.

Just how could they be sent from one location to another near instantaneously with precision? The apparatus at the Colorado site would help Tesla to answer this question, and answer it he did.

Indeed, as his work proceeded even the locals themselves were not unaware of his activities. The experiments Tesla conducted could be seen even for miles around. With his large Magnifying Transmitter operational, sparks were created some 30 feet long, which were even witnessed 10 miles away. Moreover, it was even able to produce lightning and thunder. Also, for those walking near to the lab, sparks were seen to come up from the ground to their feet. Indeed, when his equipment was active a blue corona could be seen about the whole building.

Tesla's Wireless Transmission of Power through the Ground

In the course of his work Tesla produced some quite profound and very novel effects. In his investigation of electromagnetic wave propagation and resonance, and atmosphere electricity, he was able to pick up lightning signals via his receivers. He was also able to light up hundreds of lamps placed upon the ground up to 26 miles away by transmitting energy through the ground. Photographs of the time still exist today to confirm this feat. Yet further to such achievements though, it was on 3 July 1899 that Tesla made what he himself believed was his most important discovery.

Namely that the Earth was found to contain stationary waves. That the whole planet itself was essentially of the character of a very smoothly polished conductor possessed of electrical vibrations, with a set of proscribed frequencies that it was able to respond to. This was a most crucial discovery, that directly touched upon the matter of energy transference between different sites upon the Earth. What Tesla showed was that a large high-voltage resonance transformer could act as a transmitter of wireless energy, which itself could be picked up by a separate resonance transformer being tuned to the same high frequency as that of the much larger coil. Tesla expressed the central idea in a later interview:

The idea presented itself to me that it might be possible, under observance of proper conditions of resonance, to transmit electric energy through the Earth, thus dispensing with all artificial conductors.

The apparatus then outlined by me consisted of a transmitter comprising a primary circuit excited from an alternator or equivalent source of electrical energy and a high potential secondary resonant circuit, connected with its terminals to the ground and to an elevated capacity, and a similar tuned receiving circuit including the operative device. On that occasion I expressed myself confidently on the feasibility of flashing in this manner not only signals to any terrestrial distance but transmitting power in unlimited amounts for all sorts of industrial purposes.

In going further Tesla explained that the key to the whole matter was in being able to excite the Earth into resonant vibration. Carefully controlled, the whole process could achieve the generation and trans-mission of power with great precision to any desired location upon the planet. Once more, in Tesla’s own words:

When the earth is struck mechanically, as is the case in some powerful terrestrial upheaval, it vibrates like a bell, its period being measured in hours. When it is struck electrically, the charge oscillates, approximately, twelve times a second. By impressing upon it current waves of certain lengths, definitely related to its diameter, the globe is thrown into resonant vibration like a wire, stationary waves forming, the nodal and ventral regions of which can be located with mathematical precision.

By proper use of such disturbances a wave may be made to travel over the earth's surface with any velocity desired, and an electrical effect produced at any spot which can be selected at will and the geographical position of which can be closely ascertained from simple rules of trigonometry.

With the critical discoveries made at his Colorado laboratory, Tesla developed a grand vision as to their global application. Of just how wireless technology, including the transmission of messages and power, could be sent around the globe with precision to benefit all of humanity. Tesla referred to this as his ‘World System,’ which would involve the construction of a network of power plants based upon his key discoveries and inventions. A summary of the main features of the system was given by a technical statement of the time:

The first "World System" power plant can be put in operation in nine months. With this power plant, it will be practicable to attain electrical activities up to ten million horsepower and it is designed to serve for as many technical achievements as are possible without due expense. Among these are the following:

1) The interconnection of existing telegraph exchanges or offices all over the world;

2) The establishment of a secret and non-interferable government telegraph service;

3) The interconnection of all present telephone exchanges or offices around the Globe;

4) The universal distribution of general news by telegraph or telephone, in conjunction with the Press;

5) The establishment of such a "World System" of intelligence transmission for exclusive private use;

6) The interconnection and operation of all stock tickers of the world;

7) The establishment of a World system—of musical distribution, etc.;

8) The universal registration of time by cheap clocks indicating the hour with astronomical precision and requiring no attention whatever;

10) The establishment of a universal marine service enabling the navigators of all ships to steer perfectly without compass, to determine the exact location, hour and speak; to prevent collisions and disasters, etc.;

11) The inauguration of a system of world printing on land and sea;

12) The world reproduction of photographic pictures and all kinds of drawings or records..."

With respect to the above, in regard to the transmission of messages, it is well to note that what made the whole system work on a practical level was what Tesla called “The Art of Individuation” – one of his greatest inventions in this field. It was this that allowed for signals and messages to be transmitted both in an active and passive aspect with absolute secrecy, being non-interfering and non-interferable. Each transmitted signal was possessed of its own individual identity, and as such one could thus operate innumerable stations conveying an almost unlimited number of messages, without any of them interfering with one another.