After completing his work in Colorado Springs Tesla departed on 7 January 1900; his laboratory being dismantled to cover some of his debts. With his new discoveries now in hand events moved rapidly forwards, with Tesla seeking out financial backing to construct the first power plant/wireless transmission station of the ‘world system’ he envisioned. Up stepped the great financier J. P. Morgan. After several discussions Tesla was able to convince Morgan of the superiority of his system over those of his competitors, and in 1901 a contract was signed between both men granting Tesla $150,000 to build the station on Long Island, New York (a sum equivalent to $4,252,200 in present day US dollars). This gave Morgan precisely 51% of the company that was formed around the project. 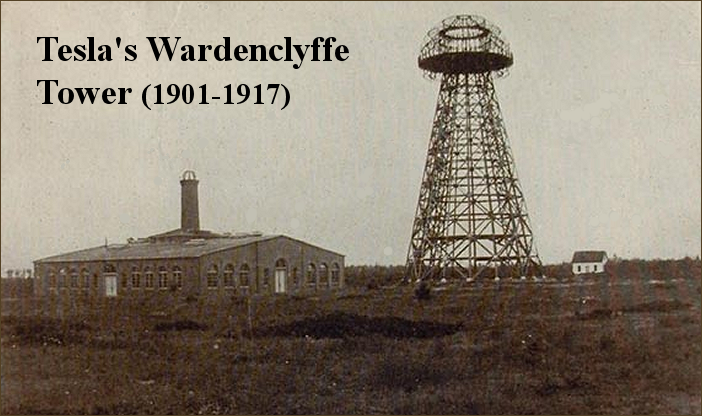 The actual construction of Tesla’s new power plant began in 1901 in September, at a place called Wardenclyffe. It was to be the first of a network of 30 plants sited worldwide, all capable of broadcasting power and transmitting messages. The Wardenclyffe site was to be the central hub of the entire system; the actual facility itself consisting of two parts. The first being the main building, as designed by the architect Stanford White. And the second, a special tower built to Tesla’s own specifications. The former component was some 94 feet square, constructed to house the boiler, a generator, machinery, and also various laboratory equipment to run the site. All of this was linked to the tower – the critical element of the entire facility – which itself was assembled close by.

Now the tower was certainly quite an elaborate structure. It consisted of a wooden frame some 187 feet high supporting a large cupola, or dome-like ball 68 feet in diameter, which itself was composed of some 55 tonnes of steel. This though was merely the surface component of the tower. Indeed, there was a very special subsurface element to the design, as revealed something critical about the whole project. Namely, a fundamental disagreement that existed between Tesla and his contemporaries, regarding the very issue of transmitting wireless signals.

The whole concept of wireless radio transmission as developed at the close of the 19th century rested primarily upon the work of one Heinrich Hertz, who did achieve a certain success in transmitting a series of radio waves over a small distance. But just what exactly was it that allowed for this effect, and just how was it to be interpreted? The conventional view as generally accepted at the time was that it was due to Hertz using his equipment to disturb a solid material aether of some sort, in order to convey his signal. Tesla totally disagreed with this assessment however. In his own words:

When Dr Heinrich Hertz undertook his experiments from 1887 to 1889 his object was to demonstrate a theory postulating a medium filling all space, called the ether, which was structureless, of inconceivable tenuity and yet solid and possessed of rigidity incomparably greater than that of the hardest steel.  He obtained certain results and the whole world acclaimed them as an experimental verification of that cherished theory. But in reality what he observed tended to prove just its fallacy.

I had maintained for many years before that such a medium as supposed could not exist, and that we must rather accept the view that all space is filled with a gaseous substance. On repeating the Hertz experiments with much improved and very powerful apparatus, I satisfied myself that what he had observed was nothing else but effects of longitudinal waves in a gaseous medium, that is to say, waves, propagated by alternate compression and expansion.  He had observed waves in the ether much of the nature of sound waves in the air.

It is unfortunate that the work of Heinrich Hertz produced results which were so greatly misinterpreted, such that he retarded the advance of wireless technology by many decades. This is something that Tesla himself explained and lamented on many occasions, and in many publications over the course of his life. For consider the exact nature of wireless signals, wherein a transmitting circuit is connected to the Earth, and to an antenna. Once more, Tesla explains:

The transmitter being in action, two effects are produced: Hertz waves pass through the air, and a current traverses the Earth. The former propagate with the speed of light and their energy is unrecoverable in the circuit.... Theoretically, the energy of the current is recoverable in its entirety in properly tuned receivers.

The essential point to note is that what is emitted from the antenna into the atmosphere and propagates through the air at the speed of light are mere radiations. Being of the electromagnetic spectrum such radiations rapidly lose their power and diminish over short distances. This is the point that Tesla makes in noting that is it extremely difficult for such signals to be recovered and picked up by a receiver some distance away from the transmitter.

Realising the near worthlessness of the Hertz waves, Tesla's work led him to consider the wireless transmission of signals and power through the Earth itself. The focus was therefore upon the ground current, and to this end the Wardenclyffe plant had a very elaborate subsurface component. One that was absolutely critical to form an energetic link between it and the Earth, in order to facilitate the transmission of power. Tesla described this feature of his plant as follows:

In this system that I have invented it is necessary for the machine to get a grip of the earth, otherwise it cannot shake the earth.  It has to have a grip on the earth so that the whole of this globe can quiver, and to do that it is necessary to carry out a very expensive construction. I had in fact invented special machines. . . . There was a big shaft about ten by twelve feet going down about one hundred and twenty feet and this was first covered with timber and the inside with steel and in the centre of this there was a winding stairs going down and in the centre of the stairs there was a big shaft again through which the current was to pass . . . And then the real expensive work was to connect that central part with the earth, and there I had special machines rigged up which would push the iron pipe, one length after another, and I pushed these iron pipes, I think sixteen of them, three hundred feet, and then the current through these pipes takes hold of the earth. Now that was a very expensive part of the work, but it does not show on the tower, but it belongs to the tower.

It can be seen then that Tesla had devised a giant terminal set deep under his tower to connect it with the Earth. The main focus of the endeavour was thus on the transmission of signals and power through the ground, with a complex subsurface element to the tower being necessary to achieve this.

Overall, the Wardenclyffe project was a massive undertaking. A grand plan to be sure. One that was both expensive and elaborate, with Tesla himself committing everything he personally had to the project. His aim was nothing less than to outperform all of his rivals in every way and bring global communications and power to the people the world over. Sadly however, it never reached full completion. An incredible series of events conspired to see the whole venture implode in spectacular fashion. Tesla’s grand world system was never realised in his lifetime.


Next: The Collapse of the Wardenclyffe Tower Project