Nikola Tesla: The Collapse of the Wardenclyffe Tower Project 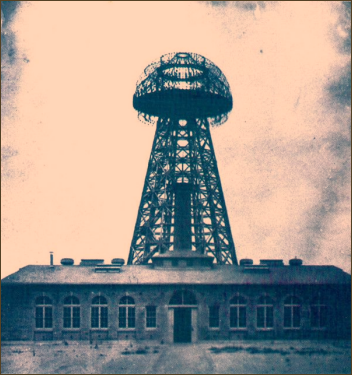 In the beginning there were certainly high hopes for the Wardenclyffe Tower project, and Tesla proceeded quickly to get it underway. With money secured and land acquired, construction followed shortly on the key elements of the site. For the main equipment, on 21 March of 1901, the Westinghouse Electric Company was enlisted to construct the generators and transformers needed.

By February of 1902, the power house building some 94 feet square was completed, as indeed were the foundations for the tower itself, including the 120 foot deep well. That being said, as the project proceeded, there were delays, the most important of which related to changes to the design of the tower. And here it is well to note, that originally J. P. Morgan had agreed to fund the project with the aim of building a tower that was only 90 feet high.

However, the tower as designed to the original specifications contained some critical defects, and Tesla wrote to Morgan to explain this. He also noted in his letter that the plant could only work to a range of a few hundred miles.

Tesla thus informed his investor of his decision to double the size of the plant, and this ultimately is what led to the tower being built to the height of 187 feet. Such a shift in design inevitably caused delays to the whole project. Yet to add further to the difficulties, as the work proceeded in erecting the tower, even labour disputes emerged. In July of 1902 issues arose between carpenters and labourers at the site of the tower over perceived dangerous working practices, which held up construction still further.

With the critical design changes to the tower, including labour delays, greater funds were thus necessary to continue the project, and Tesla needed his primary investor Morgan to release those funds. Now unfortunately for Tesla, his great rival Marconi was himself being lauded in the press for his own achievements in wireless telegraphy, at the very same time that Tesla sought the necessary funds to complete Wardenclyffe. In December of 1901 Marconi was able to send a signal – the letter ‘S’ – from Cornwall, England, across the Atlantic ocean to the island of Newfoundland. It was quite the sensation at the time.

And yet the method itself was somewhat crude, only employing a single circuit transmitter, as opposed to the primary-secondary type of Tesla. More than this however, Tesla noted that Marconi had in fact only achieved this feat by making use of 17 of his own patents without his permission. Still, the whole affair did seem to detract from the work that Tesla himself was doing, which was far more ambitious. 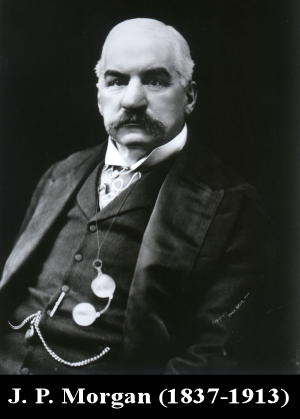 In further correspondence with Morgan, Tesla seemingly had to fight to keep him interested and financially committed to the Wardenclyffe project – and this at a time when funds were beginning to run dangerously low. Indeed, even though the tower and the main building itself had been completed in terms of their essential structure, a significant amount of work still had to be done to make the plant fully operational.

And here, Tesla was entirely in Morgan’s power on the issue of obtaining the necessary funds to bring the project to full completion. Further requests for additional money involved praising Morgan for his backing so far, and then simply begging for further help. Morgan though, for his part, made a critical decision to abandon Tesla, and sever all financial support to the Wardenclyffe project.

Now the main reason why Tesla’s primary investor chose to pull out of the project would seem to be because of his realisation that it might become a threat to other industrial concerns that he was already committed to at the time.

To be sure, originally, Morgan was under the impression that the plant he was financing was essentially intended for use in the wireless transmission of messages and signals.

Now whereas this was most certainly a capability of the tower, the main focus as far as Tesla was concerned, was in broadcasting power itself wirelessly. In either case though – signals or power – both would, under Tesla’s system be transmitted through the Earth itself. The main issue at hand to Morgan though was not actually how Tesla sought to wirelessly broadcast the power, but the implications of doing so. And here, there is a rather legendary encounter to note between investor and inventor upon this point.

When J. P. Morgan was fully informed of the capability of the plant to broadcast power, his response was effectively, “Where do we put the Meter?” What could Tesla possibly say to this that could satisfy any investor? If the power plant were freely broadcasting energy, then anybody could set up a local ground connection to draw off whatever measure they so wished. It would be impossible to control or to regulate the usage of any customer. How could any investor get a return from such an arrangement? Moreover, the very ability to tap into the Earth itself to extract free energy in abundance, were it to become widely established, would devastate all of the other major industries in competition, such as coal.

In a decisive exchange in July 1903 between Morgan and Tesla, the inventor himself does acknowledge that he had not at the time of seeking his investment disclosed everything concerning the Wardenclyffe plant: that it was to be a wireless power plant. Tesla feared that if he had done so, Morgan would never have invested. Even so, at this late stage, still he appealed for his help in funding the remainder of the project. Morgan though, by this time, was completely unmoved:

"If I would have told you such as this before, you would have fired me out of your office. Will you help me or let my great work—almost complete—go to pots?"

"I have received your letter and in reply would say that I should not feel disposed at present to make any further advances."

With Morgan abandoning Tesla and the Wardenclyffe project, there were very few other investors that would dare touch it. And not to the extent that they could carry it forward to completion. Thomas Fortune Ryan serves as one notable example. A man who injected further funds into the plant, only for them to go towards the payment of debts already associated with it. Indeed, over the next couple of years Tesla struggled just to maintain the site, whilst he desperately sought the money necessary to complete it. Yet more problems arose however, that some suggest even led to Tesla having a nervous breakdown.

In 1905 the patents that Tesla held on alternating current ran out, and with them the royalty payments he was using to help sustain Wardenclyffe. In 1906 the architect and friend of Tesla, Stanford White, who had designed the site’s main building, was murdered over an adulterous affair with another man’s wife. In addition to this, in October of the same year, Tesla’s long time investor William Rankine died of a heart attack. And yet more than this though, Tesla’s great rival Marconi had himself by this time set up his own regular wireless service, employing equipment far less expensive than that devised by Tesla. Investor money was thus flowing to Marconi and away from him. As a result, rumours even started that Tesla’s entire project was some sort of hoax, which further dissuaded any potential investors. 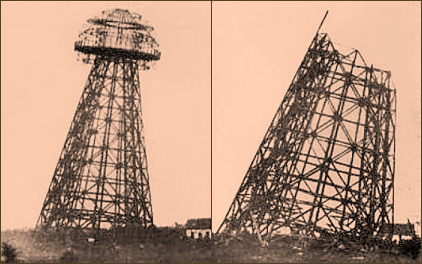 By the end of 1906 Tesla himself departed from Wardenclyffe. What led to the final demise of the site though was a complete unravelling of Tesla’s finances, with a series of legal judgements against him. The first to note concerned certain equipment and machinery as supplied to the Wardenclyffe plant by Westinghouse, Church, Kerr & Company. Here a legal judgement was obtained against Tesla for some $23,500, which led in 1912 to the seizure and removal of equipment from the Wardenclyffe site.

In addition to this, in 1904 and 1908, Tesla took out 2 mortgages on the Wardenclyffe property with the then proprietor of the Waldorf-Astoria Hotel, one George C. Boldt. Being unable to make the payments, in 1915 Tesla had to sign over the deed of the property to Boldt. Subsequently, in 1917 the tower ended up being demolished and sold for scrap.

It was all over. The Wardenclyffe plant had never been completed. The world never having seen it fully functional.

In 1919 two years after the destruction of the tower, Tesla wrote about the project and its total demise. He even spoke about J. P. Morgan with regard to the matter. And here, it would seem that Tesla himself certainly did not in any way blame him for pulling out of the project. Indeed, he praised Morgan. Overall, Tesla never appears to have really had any ill feelings towards those who backed his projects, including Morgan, Westinghouse, Astor, or anyone else. Rather, the main source of his ire would seem to have been directed towards others: his technical rivals.

Herein there are many instances of Tesla complaining about them stealing the ideas in his patents without giving him due recognition, and even, outrageously, having some of his patents unjustly overturned in favour of their own. More than this however, it is so clear to see the frustration in Tesla’s writings when he notes the direction being taken by his contemporaries in the field of electrical engineering. Operating under a false understanding of the work of Heinrich Hertz, they were going forwards in the field of wireless telegraphy by constructing powerful antennas to pump out signals of electromagnetic radiation through the air. An approach that Tesla held to be completely misguided and weak. His own focus was upon using the Earth itself to transmit signals, including power, by making use of the ground current.

To be sure, the Wardenclyffe plant was designed to achieve exactly this. How exasperating it must have been then for Tesla trying to bring his great work to the world. His grand project explored a principle his contemporaries were ignoring. Yet he needed both the money and time to complete it. In the end he simply ran out of both. In the critical period whilst he was still trying to finalise his plant, others were ‘borrowing’ his patented ideas and making quick yet crude successes, garnering them far more attention than they really deserved.

If events had not conspired the way they did, Tesla undoubtedly would have blown away the competition with his fully operational plant. Yet more than this however, he would have set the world upon a very different path in the establishment of global wireless communications. It is therefore well worth considering Tesla’s words, given in 1919, concerning his primary backer J. P. Morgan, and his thoughts on his great venture being brought low:

Mr. J. Pierpont Morgan did not interest himself with me in a business way but in the same large spirit in which he has assisted many other pioneers. He carried out his generous promise to the letter and it would have been most unreasonable to expect from him anything more. He had the highest regard for my attainments and gave me every evidence of his complete faith in my ability to ultimately achieve what I had set out to do. I am unwilling to accord to some small minded and jealous individuals the satisfaction of having thwarted my efforts. These men are to me nothing more than microbes of a nasty dis-ease. My project was retarded by laws of nature. The world was not prepared for it. It was too far ahead of time. But the same laws will prevail in the end and make it a triumphal success.


The above text was an excerpt from my book Occult Physics (Chapter 15). To know more, and find out how Tesla's work was secretly pursued by the US government following his death in 1943, consider purchasing my book via the following link: