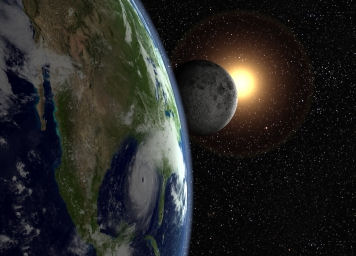 The idea that the Earth once had a 360-day orbit about the Sun is considered a nonsense by modern astronomers, having no basis in fact. As far as they are concerned, the Earth has never had an exact orbit of 360 days, period. To be sure, the current value of 365.2421897 days [1], as determined by modern instrumentation, was established over eons by purely random celestial activity. Indeed, at no point during the formation of the solar system right up to the present, was there ever an exacting 360-day year, either by natural law or 'natural intent.' This being the official position of modern astronomers.

The Ancients Had Other Ideas

Now in contrast, according to the Sumerian, Babylonian and Egyptian civilisations, as existed several millennia ago, the universal cosmic architecture was once perfect. Everything in the heavens was in a state of simple yet elegant harmony. And at such a time there were indeed 360 days in a year to the orbit of the Earth.

But what then changed?

In the mythical stories passed down from ancient cultures worldwide, at some point, Error was injected into the cosmos. Now different myths give different accounts as to exactly how the Error came to be. But they all have a certain common theme. Cosmic harmony was broken when the celestial bodies of the heavens 'revolted' and abandoned their natural stations. A new universal configuration was then established of a fundamentally different type.

In ancient Egyptian mythology there is a most intriguing story explaining just how the earth orbit was transformed. How it ceased to possess 360 days in a year and transitioned to an orbit of some 365 days. The story is set in the very distant past, at a time when the universe was still seemingly in its formative stages.

Now as is common with such mythological stories, celestial or physical forces are personified in terms of supernatural entities i.e. gods and goddesses. The actions of such beings, including fighting or procreation, are usually subtle metaphors for celestial bodies suffering some kind of direct transformation, or change of state. The crucial myth in summary form is as follows:

In the early stages of creation when new cosmological deities were still coming into being, the sky goddess Nut became pregnant due to an illicit encounter with the earth god Geb. Upon becoming aware of this, the supreme sun god Re felt threatened, suspecting that Nut's offspring might dispose him from power. As a result Re cast a curse upon Nut preventing her from giving birth on any day during the year. And indeed, at this time the earth possessed exactly 360 days in a year, as the universe was in a state of great order and harmony. 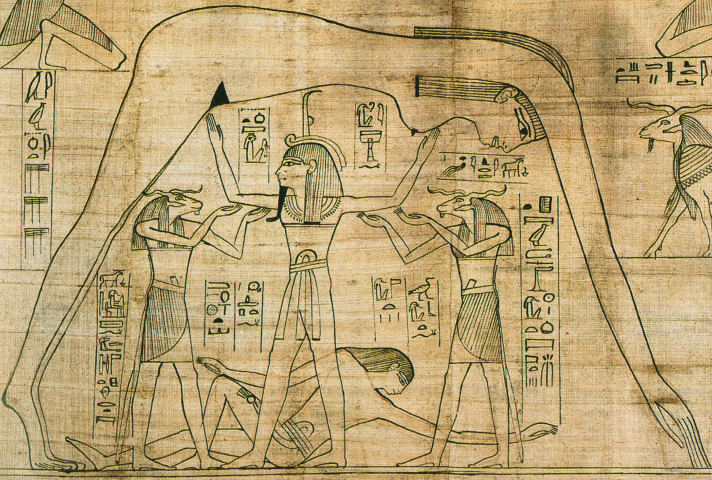 Above: The central figure is Shu, who is holding up Nut (his daughter) who is arching over him. Geb (her lover) is the Earth god lying upon the Ground. In Egyptian Myth, as depicted here, Shu is seen forcibly separating Nut and Geb from union. At some point he obviously fails, as Nut and Geb are united and Nut becomes pregnant.

Coming to the aid of Nut the wisdom god Thoth devised a plan to outmanoeuvre Re. Thoth presented himself to the moon deity Khonsu, who was a great lover of the game Senet, and he challenged him to a series of matches. The stakes however were quite unusual. Thoth proposed that if he won, his prize would be a measure of the moon's light: 1/72 to be exact. Khonsu was so confident in his abilities that he accepted. However, much to his surprise Thoth thoroughly outplayed him in the whole series. 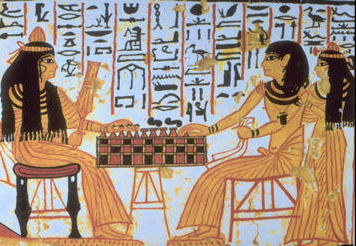 In claiming his prize, Thoth took the light that he had won from the moon and gave it to Nut. This transfer caused the earth orbit to shift and increase its length from 360 days per year to some 365.

Nut was thus able to give birth on the extra days as they were not part of the 'true' Earth year i.e. the 360 cursed days of Re. Five children were born - new gods to enter the world. Each god was born on one of the five extra days. Their names were: Isis, Osiris, Seth, Nephthys and Horus the Elder.

Above: A game of Senet being played. The best known board game of ancient Egypt. Late New Kingdom.

Now in addition to the changes that took place respecting the earth, the loss of the moon's light was no less significant to the moon itself. As a celestial body it was greatly weakened and became smaller in the sky. Indeed, prior to its loss it was a bright body and a visible emitter of light much like the sun. Following the change however it ceased to continuously shine and was forced to go into hiding to periodically recuperate. It could only shine for a time before going dark. And thus, the very phases of the moon as we know them today came into being.

Now the story as hereby presented was held by the ancient Egyptians to have had a true basis in reality. It was no mere idle tale. The Earth did indeed once possess 360 days in a year at some point in the very distant past. But due to some agent of change - mythologised by Thoth's Senet victory over Khonsu - the universal celestial architecture suffered major disruption. And this had a direct affect not just upon the Earth, but also the Moon.

Indeed, with specific regard to the Moon one should note that the ancient Egyptian calendar actually combined a 360 day ideal year with a precise 30 day month. The Moon also thus possessed its own ideal standard at the same time as the Earth. A perfect 12 / 1 ratio was present respecting the orbital periods of both bodies.

When celestial harmony was lost, the Earth year increased from 360 days to some 365 days, whereas the Moon month decreased from 30 days to its present value of about 29.5 days.

Can A Past Ideal Earth-Moon System Be Proven?

The answer to this question is a most emphatic yes. And quite ironically, the basis for the proof rests upon a key discovery in science that ALL astronomers of the present age readily accept as true - the very same modern astronomers so quick to deny that proof of a past ideal Earth-Moon system could ever be presented.

Now the key proof in question is one that came from my very own research efforts. Following almost a decade of focused study I was able to discover a series of physical laws previously unknown to mainstream science, that appear to actively govern ongoing changes to the Earth-Moon system - even at this very moment.

The laws have a precise mathematical expression. They are both simple and elegant, and absolutely confirm that a past harmonious relationship between the Earth and Moon, in line with the ancient Egyptian calendar, was once a reality.