Scalar beam weapons would appear to be something of a hot topic of late, with many researchers referencing such weapons, suggesting that they are behind many unusual military incidents, or terrorist attacks.

Very few people seem to understand though just what scalar beam weapons actually are, and how they differ from standard laser beam weapons systems. In this article therefore, I wish to discuss this very topic, and to explain exactly how scalar beams are produced, and also how they can be weaponised.

Now herein I cite the work primarily of Lt. Col. Thomas Bearden (U.S. Army, retired), as the most detailed description of scalar beam weapons are to be found in his books, Fer De Lance: Briefing on Soviet Scalar Electromagnetic Weapons (1986), Energy from the Vacuum: Concepts and Principles (2002), and Oblivion: America at the Brink (2005).

In his books, Bearden cites several key research papers that detail the physics behind scalar beams, and just how they are produced. He also touches upon the technical equipment required to actively generate such beams, and weaponise them.

The Creation of Scalar Waves

We are all no doubt familiar with the standard electromagnetic (EM) spectrum made up of EM waves of various frequencies, which include those of visible light. The actual waves of this spectrum are composed of both electric and magnetic components, operating at 90° to one another. Now to actually produce scalar waves, one must carefully overlap two standard electromagnetic light beams of like frequency, creating a radically different type of wave with significantly different properties. To illustrate this, one may consider a series of diagrams. 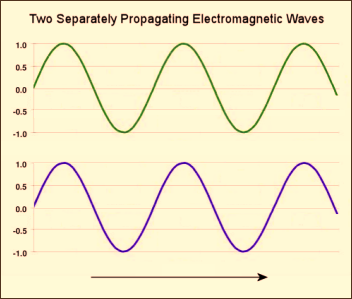 As EM waves have two components - electric and magnetic - it is impossible to depict them both for a single waveform when they are at 90° to one another.

With a 'side-on-view' one could only ever depict either the electric or magnetic component.

Be that as it may, consider a diagrammatic view of two separate propagating EM waves (left) - whether viewing the E or M component - the other assumed hidden due to the angled view.

In this case, the two waves are of like frequency, travelling together in the same direction with a maximum amplitude between 1.0 to -1.0.

Now consider merging both waves together, in phase (below). Although when propagating separately each wave had an amplitude of between 1.0 and -1.0, when merged, the maximum amplitudes are doubled to between 2.0 and -2.0:

As shown in the diagram, the resultant waveform as generated from the two merged waves is in red. The key point to note is that when the EM waves are merged in phase, one still has an electromagnetic wave, albeit of a higher amplitude, as marked in red. The wave is qualitatively the same.

We can also see what happens when the two waves are superimposed 180° out of phase with one another. In this instance, at any spatial point, the summation of the electric and magnetic fields are vector zeros, such that both the electric and magnetic field components are mathematically cancelled, depicted in this case by the resultant red 'flat-line.'

With the EM components in-folded, they are effectively not expressed, but are replaced by a very real composite wave propagating through space-time in their place. And this indeed is what a scalar wave actually is (below).

Another name for this type of wave is a longitudinal electromagnetic wave - what Nikola Tesla called a “sound wave in the non-material aether.” This type of wave is also a gravitational wave, being a stress wave travelling through space-time, altering its curvature as it propagates.

The Weaponisation of Scalar Beams

The ability to weaponise scalar waves rests upon certain special properties of this type of beam. And here, the first point to note is that scalar waves, as produced by interacting standard electromagnetic waves, may be superluminal in nature. That is to say, that they can travel many times faster than the speed of light (186282.397 miles per second). This is due to the longitudinal ‘stress-state’ nature of the waves themselves.

The second important property to note is that a focused beam of scalar waves has very little interaction with matter, unlike standard electromagnetic waves. Indeed, a standard laser beam composed of electromagnetic waves is easily blocked by matter; only being able to cut though it with high-frequency high-intensity waves, oftentimes requiring a great measure of time and effort, depending upon the targeted material. 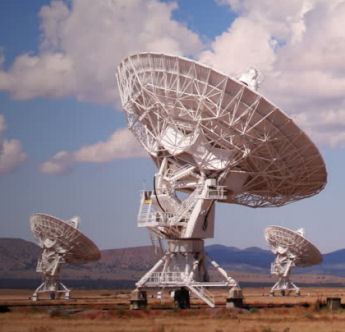 In sharp contrast, a focused beam of scalar waves pierce through matter with ease, as if it was not even there. Consequently, such a beam may be directed and fired straight through the Earth with no real practical resistance; emerging at the other side of the planet and flying off into space unimpeded.

Now it is the superluminal nature of scalar beams coupled with their low mass interaction that are the two key properties that allow such beams to be weaponised; producing highly destructive effects at a distance, with practically no ability to defend against. Herein Thomas Bearden himself notes that basic radar dishes can be modified to produce scalar beams relatively inexpensively

Indeed, with such dishes being given the freedom of movement to be able to point directly into the ground, they are actually able to fire straight through the Earth itself.

Unlocking the Electromagnetic Energy of the Scalar Beams

The very key to weaponising scalar beams rests upon unlocking the in-folded electromagnetic components of the beams themselves, at a distance. In order to do this, one needs to essentially interfere two scalar beams, separately generated, at some distant target site. In this respect, one may consider the following diagram:

Imagine two modified radar dishes, even several hundred miles apart, each generating a scalar beam, which are fired straight through the Earth.

With precise targeting, now imagine that both beams emerge from the Earth and interact with one another just above ground, at some select target location at the other side of the world. In the interference zone, where the beams interact with one another, the electromagnetic effects are now unlocked and re-emerge. Through this process, by careful interaction of two scalar beams at a distance, one may produce either one of two possible effects:

2) “Cold explosions,” which in fact are more properly implosion effects.

Destructive energetic spheres of energy produced by scalar beam weapons within the atmosphere, either explosive or implosive in nature, are achievable on a grand scale. And indeed, this is not merely theoretical. It has been conclusively demonstrated.

There exist many witness reports from highly credible people such as airline pilots who have sighted such weapons systems in action throughout the 1980s, out at sea. These primarily were Soviet tests, oftentimes conducted in conjunction with nuclear tests, also out at sea.

In one such case an airline pilot reported a large mushroom cloud from a nuclear test, above which, almost sat on top of the cloud, was a massive expanding sphere. The diameter of the sphere as estimated was held to be approximately 380 miles!

More than this however, another capability of these beam weapons is that they are able to artificially generate earthquakes. This being achievable because scalar beams themselves have the ability to penetrate the Earth with practically no resistance.

In this instance then, if one creates an interference zone deep within the Earth - anywhere from 10 to 500 miles depth for example – then via a special (i.e. highly classified) boosting process, one is able to generate an extreme seismic event. One that might be registered (naively) as a natural earthquake. In this way one may thus attack another country almost with impunity with plausible deniability.

No Warning. No Defence

With respect to the capabilities of scalar beam weapons it is important to understand that due to the superluminal nature of the beams themselves, such attacks cannot be blocked. Once the scalar beams are produced at source - via modified radar dishes - the beams themselves are able to “tunnel” through “normal” space practically unimpeded.

The energetic effect produced in the interference zone is one that is almost instantaneously manifest. It is as if the generation of the scalar beams at source is instantaneously tied to the far removed interference zone, without the beams ‘covering’ the distance in between. For this reason such weapons are of immense strategic significance; almost denying one the ability to defend against a scalar beam weapon attack. Either via a destructive energetic sphere, or artificially generated earthquake.