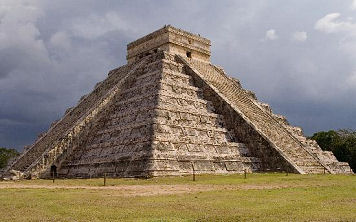 A Mayan Calendar of World Ages: The Long Count Cycle

In addition to the 260-day Mayan cycle, including also the 52 year Venus calendar, the Maya of Central America were also responsible for developing and establishing a calendar of far greater range and duration; one that was based upon a recurring time period of precisely 1872000 days, approximately equal to 5125.36 years. The name given to this particular calendar is the Long Count.

Brought to light from the study of various stelae (carved stones) from the ruins of ancient and abandoned Mayan cities throughout the Yucatan peninsula during the early 20th century, the Long Count was found to be composed of an intricate set of interlocking time cycles, far more complex than those of the basic 52 year Venus calendar. That being said, it is well to note though that Mayan inscriptions of the Venus calendar were invariably placed right beside carved inscriptions of various long count dates, on the very same stelae.

In effect, both systems as presented would appear to be but two aspects of a single unified calendar system. That such is widely accepted in academic circles can be had from the fact that scholars oftentimes refer to the 52 year Venus calendar as the ‘short count’, to distinguish it from the far lengthier 5125 year Long Count.

The Creation of the Long Count

From the surviving stelae as examined, modern scholars determined in the course of their early studies that the Long Count calendar was in all likelihood established sometime about 500 BC, though this does represent somewhat of a tentative date. For indeed, the earliest known stelae uncovered from excavations were found to date only to the 1st century BC, sometime much later. However, it was felt that the calendar system may have been in use in the preceding centuries in somewhat of a developmental stage before being ‘committed’ to stone.

Such an assumption indeed does possess merit, were the calendar devised – as many suspect - to harmonise various key astronomical cycles; given that during this early period in their civilisation (prior to the 1st century BC), the Maya were still actively engaged in refining the primary values (through astronomical observation) of the various celestial cycles upon which they sought to base their calendar.

A careful evaluation of the nested time cycles of the Long Count calendar, as identified on various stelae, revealed that they were composed of whole number periods of earth solar days. Each had their own assigned names as known to the Maya. The basic cycles ranged from that of a single day, up to a series of far lengthier periods. In total there were five major time cycles that comprised the calendar, each fractionally harmonious with the full measure of the primary interval (of 1872000 days). The manner in which time was actually recorded using these cycles, involved setting each of the five assigned periods in sequence from left to right:

From when scholars first began to decipher the structure of the Mayan Long Count Calendar and identify its nested cycles, it quickly became apparent that some way was needed to actually align or correlate the calendar to the more familiar Julian calendar, so that scholars could see the real historical time-line of the Mayan System – and the Mayan people themselves.

Of the great many stelae that were examined from various ancient Mayan towns, numerous Long Count dates were uncovered marking important events of note, including such as certain prominent astronomical conjunctions e.g. of Venus, Mars or the Pleiades, or even the ascension of rulers.


For example, in one such settlement, there is the recording of a date of 9.16.1.0.0. which marked the ascension of a Maya king known as Bird Jaguar. Another had an inscription of 10.3.0.0.0 which denoted a time when both the Sun and the Pleiades were in conjunction [1]. These then are but just two examples of numerous discovered carvings found amongst the Mayan towns and settlements throughout the Yucatan peninsula.

During the 1st half of the 20th century, through the examination of various carved Long Count dates including the notable events marked alongside them, scholars attempted by careful reasoning – even detective work – to try to establish just how the whole calendar system corresponded to the Julian system, so that they could identify the precise dates as given by the Maya, in terms of a known Western calendar system. Essentially, what scholars were looking for was an exact date in terms of the Julian calendar, which corresponded to a date of 0.0.0.0.0. in the Long Count.

During these early years of study, many theories emerged as to just when the Mayan calendar began at time: 0.0.0.0.0. in terms of a recognised Julian date. A list of the most prominent is quite extensive: 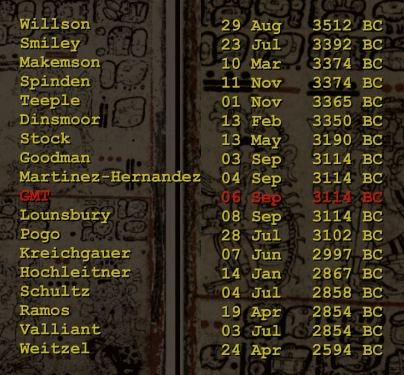 As of the present, it is the accepted opinion of academia today, that in all likelihood, the GMT date of 6 September 3114 BC (Julian Calendar), as put forth by Goodman, Martinez, and Thompson (an abbreviation of their names) is the date of 0.0.0.0.0. beginning the Mayan calendar system. As one indeed may see from the table (left), quite a number of researchers developed dates all very near to one another in the year 3114 BC, close to the beginning of September; such a fact being highly suggestive of a convergence in thinking amongst researchers, leading, one would hope, to the decisive truth [2].

[2] It is of course a major essay if not a book in and of itself that would be required to lay out the careful reasoning that underscores the basis for any of the above theories. Suffice it to say here that each of the theorists put a great deal of work into arriving at an answer as to the true start date of the calendar system. A combination of astronomical events as marked out by various long count dates, including carbon dating and various other factors, all played their part in developing the answer as to the Mayan Calendar start date. And in terms of these factors, it is felt that the GMT theory is the best explanation, to date.