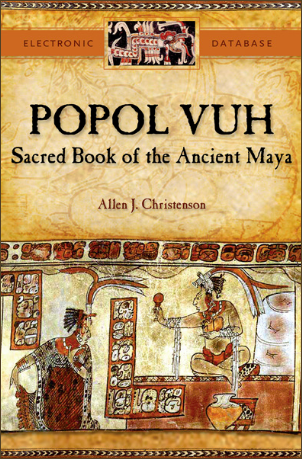 The primary source book for Mayan mythological tales is known as the Popol Vuh - what some call the ‘Mayan Bible’. It is a book that contains all of the major stories involving the gods and heroes as known to the Maya. In many ways it is very similar to Ovid's Metamorphoses, that dealt with the exploits of the Greek gods of the Olympian pantheon.

One of the most intriguing stories one might encounter within the Popol Vuh is that concerning an encounter between a character called Zipacna, and 400 boys. A classic example of a story which on the face of it seems like a children's story, but that in fact deals with advanced astronomical concepts and calendar systems.

Now to briefly summarise this story. It begins by Zipacna encountering 400 boys who are attempting to drag a great tree as a lintel for their hut. They are having difficulty with this, and so Zipacna agrees to drag it for them to where they need it.

After doing so, the 400 boys talk amongst themselves and take a dislike to Zipacna, because he is able to achieve such a great feat all on his own. And so, they conspire to kill him.

They ask him to dig a hole in the ground for them, with the intent of ramming a log down the hole to crush him when he has dug down deep enough. Zipacna agrees to dig the hole, but whilst he's going down ever deeper and throwing the Earth out, he realises that they are going to kill him, and so he plays for time. They keep asking him when he's finished, but he keeps on shouting up saying he is still digging. But he is not digging the main shaft downwards however, but a secret side tunnel as will save his life at the critical moment.

Now when this is dug out, he gets inside and then calls up to the boys that he's finished. At that moment they ram the log right down the shaft. Confident they have killed him, they retire to their hut. However, Zipacna is in fact safe in his side tunnel. After three days pass, he digs his way out, and whilst the boys are inside their hut drunk, he brings it down on top of them, and kills them all.

Now what is the solution to this story? Well, this story, although not obvious, is all about how to accurately track and derive a value for the Earth tropical year, and also how to accurately derive a value for the basic Earth-Mercury conjunction period. To begin the evaluation, one first needs to consider how one might track the Earth's orbit about the Sun, with respect to developing a calendar system. Now in general, the basic system employed today is one wherein the length of the Earth year is usually set as being equal to 365 days for three years in a row, with the following year set to 366 days; a basic leap year system that is repeated every four years.

Now given this, if one adds up the total number of days over four such years, and divides by four, one has essentially derived a value of what one must consider to be the length of a single year. However, even with such a refinement though, one still has a value that does differ quite significantly from actual observations. As indeed, it turns out that a year of 365.25 days is slightly longer than the length of the true observed year; the actual discrepancy being on the order of some 675 seconds, or 11 min and 15 seconds.

With this noted, one might just wonder therefore how many years might pass before this error rate of some 11 min 15 seconds per year, were to build up to almost one whole day? The answer is 128 years. And indeed, this, is very favourable, because this figure is readily divisible by 4, and 4 years are employed in the basic repeating leap year cycle. There are thus 32 four-year leap year cycles contained within 128 years.

Given this then, refinement of the Earth year to a more accurate value can be had by an appropriately timed variation to the basic leap year cycle. For 31 of the leap year batches, one will track 3 years of 365 days, and 1 year of 366 days. The 32nd and final batch though will be handled very differently.

On the final year of the 32nd batch, which is also the 128th year since counting began, the build-up of the yearly discrepancy of some 675 seconds will be almost equal to one whole day. And as a result, whereas ordinarily this year would be counted as a leap year of 366 days, it will be counted instead as a year of only 365 days. Thus, the 32nd leap year batch will be a batch of four years in a row equal to 365 days. Now if one adds up all of the days together of all of the 128 years, with this extra correction made, and then divides by 128, a far more refined value for the length of the Earth year will be had. 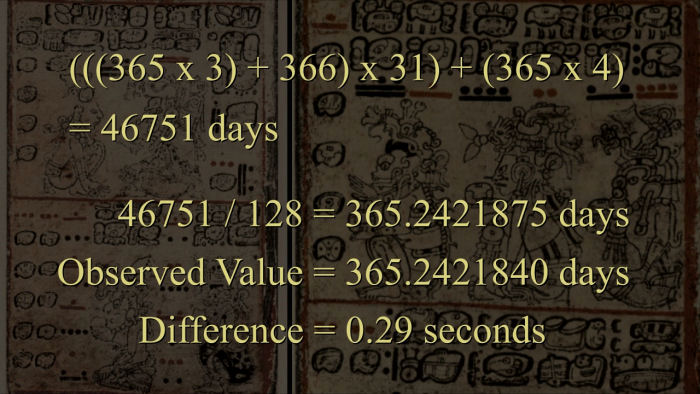 Indeed, the value as derived is so close to the observed value for the length of the Earth year, that the discrepancy is less than one second of time from the observed value. And this indeed is by far the most optimum system for tracking the length of the Earth year over long periods of time, and deriving a value for its length. It is vastly more superior even to the Gregorian calendar system used today.

But how exactly does this relate to the story of Zipacna? Well, Zipacna himself, as the central character in the story, directly represents the one special correction day every 128 years. Moreover, the hole or shaft that Zipacna digs into the ground, is directly representative of an alignment between the Sun, Mercury and the Earth. But Zipacna also digs a side tunnel. Placing himself within it. He is thus offset from the main alignment – ‘an error’ to be taken into account, so to speak. As indeed are the 400 boys also within the story.

By using a basic leap year cycle of 4 years, one is essentially operating an Earth year of 365.25 days. And upon completion of 128 such years, precisely 46752 days will have passed. It is at this point that one applies the first correction: the subtraction of one day; this being represented by the character Zipacna in the story. But what then of the four hundred boys? This number is not due to chance, for it too represents a very precise correction.

Indeed, the second operation that one engages in immediately after subtracting the one day, as represented by Zipacna, is to further subtract 400 days. And when this is done, one now has a total value of 46351 days. But just what does this value represent? This value is equal to almost exactly 400 Earth-Mercury conjunctions, and this is evident due to the fact that the number 400 has a dual purpose. Not only is it used as a correction measure of 400 days, is also used as a divisor. For if one divides the total of 46351 by 400, the value returned is 115.8775 days.

This value is practically dead on the time cycle between successive conjunctions of the Earth and Mercury. And one may cite no less an authority than the US Naval Observatory itself for confirmation of this. In the publication, “The explanatory supplement to the astronomical almanac,” there is a table of conjunction values, and the precise value of 115.8775 days is given within the table, as the very value in question. It is extremely exacting. 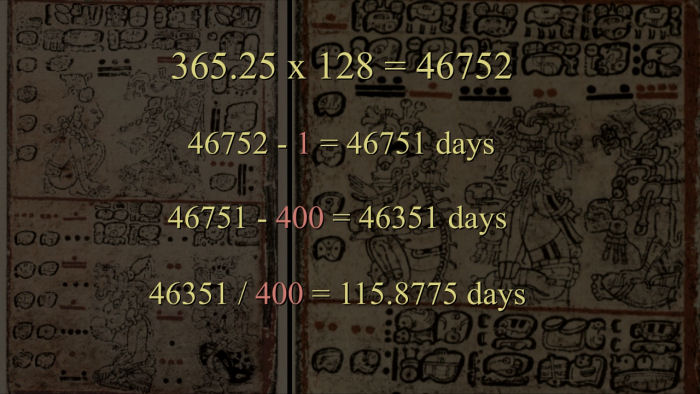 Now this implies then that this story, correctly decoded, reveals just how the Maya were able to derive an exceptionally accurate value for the Earth tropical year, and also the conjunction period between the Earth and Mercury, in addition to demonstrating how one might capture and track bulk batches of 400 such conjunctions over time with extreme precision.