The Incubus Demon - A Supernatural Attack

An Incubus Demon is a malevolent entity in the form of a male - usually an attractive one at that - said to seduce women whilst they sleep. The very word incubus is derived from the Latin words incubo, meaning nightmare, and incub(āre), meaning to lie upon. Demon sightings of this type have been recorded throughout history, but most especially during the Middle Ages in Europe, though variations do abound the world over. 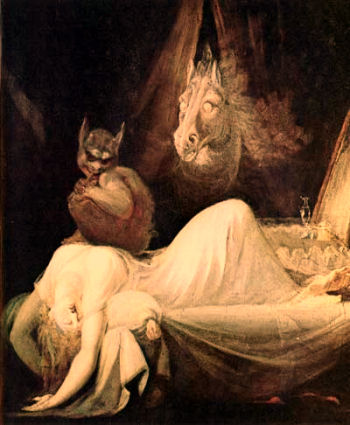 The typical case of an encounter with an incubus demon involves a woman asleep or in a semiconscious state, wherein they do not have full command of their faculties. They are usually alone, yet find themselves aware of a very powerful presence. They may not fully understand or perceive what is happening at the time, but the experience invariably is one of overwhelming terror. They are essentially the victims of a supernatural rape; their very strength and life energy being drained from them. In many cases the encounter was so surreal, that after they wake up, they may well doubt the whole event took place, or pass it off as a dream, even though, in some cases, their bodies are marked by real physical injuries!

Now there are different ideas as to the motivation behind incubus demon attacks. The dominant theory being that they seek to impregnate women to bear a demonic offspring. A half human hybrid known as a Cambion.

Actual reports of incubus demons attacking women can vary. Indeed, sometimes a woman may be consciously aware of the presence of such an entity whilst they are alone (at least in terms of other human company).

Now such entities may initially appear as an attractive male with an incredible power of persuasion. Not just through words though, but by some supernatural power. One that enables them to seduce a woman and have sex with her. Yet quite disturbingly, either during intercourse or sometime after, the demon reveals its true character - an ugly malevolent form - causing the victim to feel extreme terror.

How are Incubus Encounters Initiated? 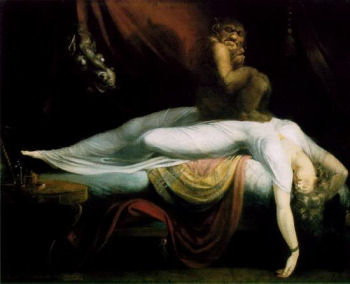 One way in which a person may be led into an encounter with an incubus demon is that they move to a location that has suffered a ‘breach’ between this world and other lower realms of existence.

Essentially, a ‘psychic trauma’ that has generated a weak spot, creating a portal, allowing various entities to pass through into this world. The site of violent deaths is one example. Such findings come readily from the study of apparitions, or ghosts. Encounters with an incubus demon can also result from individuals dabbling in the occult. Most especially experimenting with Ouija boards.

By doing so a person can effectively open up a portal – solely with their intent – to pierce through the veil to other realms of existence. An act which can allow malevolent entities to come into this world, and into the presence of those who sought such supernatural contact. And this, whether they realised the dangers or not.

Are Demons Real? The Incubus in the Modern Age

Whereas incubus demons have been well documented going back into the past – even thousands of years – there are a few modern twists in understanding this phenomenon.

The Psychologists: ‘It’s All In Your Head’

Due to the rise of science and the scientific method, there is one body of thought that essentially suggests that such attacks are all in the mind of the women themselves. Psychologists have a term for this: Parasomnia.

Here it is claimed that incubus attacks take place when a person, in their REM sleep stage i.e. when they are dreaming, becomes partially conscious. In such a state their body is paralysed, and psychologists put forth the opinion that the mind then ‘wanders,’ creating all kinds of dream sequences of a fantastic type that involve an invisible attacker raping them. And moreover, that this is tied into physical sexual arousal they suffer during this phase of ‘semiconscious sleeping.’

Psychologists thus essentially pass off those who claim to have been attacked by an incubus demon as being deluded or tricked by their own mind. Thus they are branded with the ‘diagnosis’ Parasomnia. 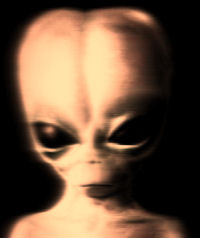 Whereas conventional psychologists do not believe in demons at all, there are other researchers that most certainly do. And yet not in the conventional sense. For indeed, in the transition into the modern age, with the advent of the UFO phenomenon – most especially since the end of World War II – quite a number of researchers studying ‘alien abductions,’ have come to the conclusion that this phenomenon is one and the same as encounters with demonic entities, as reported for thousands of years.

Here indeed there are many studies that have been done of people who have claimed to have met up with alien beings. And a significant portion of such encounters do appear to involve the aliens being particularly interested in human females, especially with regard to their reproductive capabilities.

Most certainly, there are many reports of aliens interacting with humans to gather genetic material, or plant their own foreign DNA into a human subject.

Absolute Power Over the Victim

Now one of the main features of alien abduction events that is also present with respect to incubus demon attacks, is that the abductee is rendered powerless by some extraordinary means. Concerning the latter, it is considered that the attacking demons possess magical or supernatural powers to render the female victim completely incapable of resisting them. With alien abductions however – so called in the modern era – though there is a claim that the victims are mind controlled, in many instances it is claimed that this is achieved through high technology. That is to say through devices or machines that the victim is forced to interact with, that paralyse their bodies and confusion their minds.

Further to this, there would appear also to be similarities between demon and alien encounters with respect to how well the event is recalled afterwards.

The research into abductions clearly indicates an alien intent to force the victims to forget their encounter by wiping their memory of the event, oftentimes causing them to experience episodes of ‘missing time’. Now with incubus demons, attacking their victims usually in a dream state or a state of semi consciousness; this, combined with their ‘supernatural’ power/aura, also makes it difficult to recall exactly what happened.

That being said, victims in both cases may have real physical trauma associated with their encounters. Cuts, bruises, or even, in the case of alien encounters, implants. Further to this, more details of the events can be had from the victims under hypnosis.

How to Stop an Incubus demon or Alien Abduction

Quite remarkably there is some evidence, albeit anecdotal, that such encounters can be stopped. And here there is a spiritual aspect to this. In some cases of attack by a supernatural malevolent entity, or a forced abduction by aliens, certain people have reported that they called upon the name of Jesus to help them. In the crisis moment of the experience, a sincere plea for spiritual help would appear to have saved some people.

In calling upon Jesus, certain alien beings are reported to have fled in terror and shock from their would be victims. And certain demonic entities have instantly disappeared back to their own realm, unable to carry out their attacks.