In studying the natural world scientists must be able to quantify that which they observe. An established set of physical measures must therefore be to hand at the beginning of any investigation. That being said, scientific breakthroughs in understanding various phenomena can give rise to the creation of entirely new units of measure, and also lead to the modification of an initial set.

Indeed, the whole notion of sacred geometry is bound up with actively discovering the natural ‘units of creation’, as are fundamentally a part of its unfolding. Now when one thinks of units of measure respecting the physical domain, the two most common that spring to mind are Time and Distance. Concerning the former, there is almost universal acceptance of the standard units as employed in both the sciences and everyday life. Practically everyone agrees upon the use of seconds, minutes and hours.

However, no such universal consensus exists with respect to distance. Here there are two widely employed systems of measure used throughout the world today: Imperial and Metric.

The origin of Imperial measures is quite obscure, stretching deep into the past. Moreover, one must admit of subtle variations amongst ancient cultures respecting many key unit values e.g. the foot and the cubit (see image below for cubit rod held in Louvre Museum). This is evident when one compares such as Sumer, Babylon, Egypt, and the old Roman Empire. That said, there has however been a certain ‘evolution’ leading to the currently established set of Imperial Measures, with the notable expansion of the British Empire giving the System global prominence in the modern era.

Now in stark contrast to Imperial Measures, the Metric system, based upon the fundamental unit distance that is the Metre, is a very recent invention. This set of distance measures, that include the centimetre, metre, and kilometre, were established in the aftermath of the French Revolution in the last decade of the 18th century. Just how the French established the Metre unit though is very interesting, in ultimately proving the special nature of the Imperial System, and indeed in validating sacred geometry itself. The very word geometry quite literally means earth-measure. And in establishing the Metre unit, the French very deliberately chose to base it in accordance with the size of the earth itself. To this end they undertook one of the greatest surveys ever made to accurately measure the earth’s circumference. Using existing units of measure as available at the time, a team of surveyors very carefully measured the distance between Dunkirk and Barcelona, covering approximately 669 statute miles over the earth’s surface in a very exacting north-south direction.

Under the French Metric system then, a harmonious fit between the metre and the earth polar circumference was a necessary consequence of how the French defined the unit.

Were Imperial Measures Also Originally Based upon the Earth Circumference?

Now here is where things get very interesting, and where one ends up touching upon certain occult knowledge as secretly passed down from ancient times to the present.

Performing a very exacting analysis comparing certain choice measures of the Imperial System against the most advanced earth model of the present age (WGS84), one is able to demonstrate a most remarkable connection between Imperial Units and the earth form. And following careful evaluation of the relations uncovered, such units are revealed to be of incredible significance.

Now the very analysis that yields this, effectively validating sacred geometry itself, has one crucial requirement. One must focus upon the circular circumference of the earth at the equator, and not the elliptical polar circumference, as the French did.

Consider the Imperial unit measure that is the Fathom:

1 Fathom is equal to 6 feet in length.

And for convenience, one may scale this up by a multiplier of 1000 (taking a cue from the French: 1 metre x 1000 = 1 kilometre) to get a more convenient measure for mapping the earth.

Note the relationship between this unit measure and the earth equator:

Now at first glance the answer obtained of 21913.28558 almost seems random, and of no significance at all. However, when one considers it in light of the basic units employed in angular measure today, a remarkable breakthrough is to be had.

Now note the total number of minutes of arc as sweep out a circle: 21600. The value is very close to that of the circumference of the earth given above measured in units of 1000 fathoms, or 6000 feet. There is thus a strong hint of a very important relationship at work here. And this is revealed when one studies the ratio between both values:

The significance of this ratio is to be had when one considers the previous articles on ancient Egyptian mythology, and of how the earth orbital period increased from 360 days to its present value. One may recall the ratio between the current earth tropical year and the Egyptian ideal:

Considering the close match of both noted ratios, one is led to a very distinct conclusion. 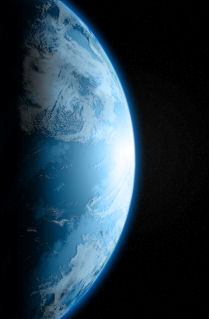 In the previous articles detailing the transformation of the earth tropical year, it was shown how exacting physical laws of proportion actively govern related celestial changes.

With Kepler's Law it was revealed how a change in the mean distance of a planet orbiting the sun is related to a change in its orbital period. In this instance by way of a combination of powers of 3 and 2. As an extension of this, it was further shown how a specific change to the orbital period of the earth (tropical year) is also related to a change to the moon month (synodic). This involving the powers 11 and 12; proving that with an earth of 360 days per year, the moon must simultaneously have had a 30 day month.

Now with the present finding linked to the earth form, there is yet a further connection for the earth tropical year, and a further law of proportion revealed. The general statement of the law and its presentation in equation form are as follows:

The truth of this law necessitates that when the earth had precisely 360 days per year, it had a very exacting equatorial circumference in perfect harmony with Imperial measures; being 21600 units of 6000 feet. An ideal circumference to match an ideal earth year:

Now as the earth orbit was shifted leading to a transformation of the tropical year to its current value, the planet itself expanded at the equator in direct proportion:

NB: Though a minor difference exists between both ratios, the tropical year ratio of increase as cited here is to be favoured over the earth equatorial ratio, due to the greater complexities of establishing a physical standard for the earth circumference.

One can even see how this ties in to ancient Egyptian mythology. Concerning the specific tale in question, one may recall that the noted earth changes occurred due to the Sky Goddess Nut becoming pregnant. Now women in pregnancy certainly do get bigger. The earth itself thus expanded and got bigger, coinciding with an orbital shift extending the length of the year by the addition of some 5 extra days.

Essentially, the solution to the basis of Imperial Measures offers proof that the earth as a planet was in the past in very real terms physically smaller. And that Imperial units as established today are based upon the ideal equatorial circumference of the planet existent at a time when it possessed 360 days per year. With this configuration, unity itself was present between the basic units of angular measure and the arc length distance measures as subtended them over the earth surface. And in this regard one should point out the special significance of a unit measure of 6000 feet (1000 fathoms).

With respect to both the current elliptical polar circumference of the earth and the circular equatorial circumference, minute of arc measures are today used to derive two key distance units that are actively used in the sciences. They are respectively:


The Nautical Mile
The Geographical Mile

Each of these unit measures are derived by simply taking the respective circumference values in feet and dividing them by 21600 - the full measure of minutes of arc as split up a circle:


Now in my book The Lost Age of High Knowledge (see bottom half of Home Page for details), I present a detailed proof that when the earth possessed 360 days per year, it was a perfectly spherical body and not an ellipsoid. And consequently, the polar circumference and the elliptical circumference were both circular at the time; each being 129600000 feet (21600 x 6000).

Under the ideal earth then both the nautical mile and the geographical mile were both equal to 6000 feet. The key thing to realise though is that though the earth has expanded, Imperial unit measures as established today are still based upon the ideal configuration of the planet. And they form a special set of units whose fractional derivatives even now are of high significance. Indeed, some of the most sensitive military/intelligence facilities as sited around the world have been deliberated separated by basic harmonic divisions linked to Imperial Measures, or close variations.

In my book I give several key examples of such facilities. Many more I hope to give also on this website, as indeed a deep consideration of such facilities proves that Imperial Measures are not merely an arbitrary set of units. They are of true energetic significance, being in fact wavelength units of a special harmonic set complimenting various important frequencies that have certain very unusual properties. Truly they are the basis of sacred geometry.

Next: The Lunar Cycle Calendar & the Metonic Interval

[1] This is the equatorial circumference based on the WGS84 earth ellipsoid model.