If all of the great global disasters recorded in history are triggered by planetary alignments, then it would be well to understand just what types of configurations represent a danger. Essentially, just which planets in conjunction are able to achieve global catastrophe, marking the end of one world age cycle and the beginning of another?

One such pattern has already been revealed in the form of two alignments simultaneously achieved, slightly offset from one another: A conjunction of Mars, Venus, the Sun and Mercury – all closely aligned to the galactic centre, where the earth is separately aligned with the sun and the Pleiades star group: 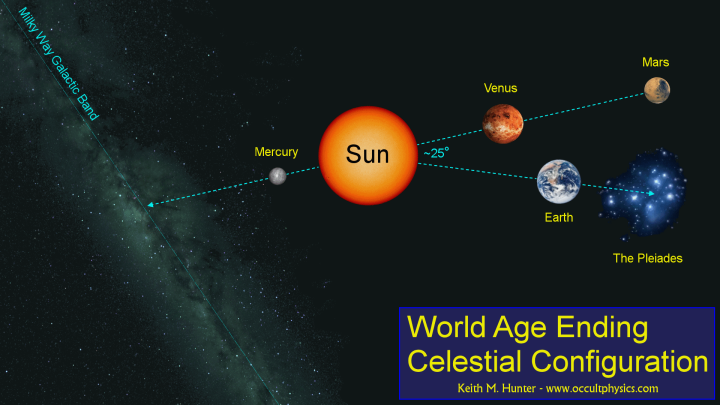 Now this particular alignment (above), discussed at some length in previous articles, is but one of many special types of planetary alignments capable of triggering great earth changes. That being said, one must acknowledge that on account of its well-defined cyclical nature, it is by far the most important, as one will shortly see.

Based upon the sidereal year then, the configuration itself is achieved every 4497 years, within which are a further 3 instances of the pattern at irregular intervals: 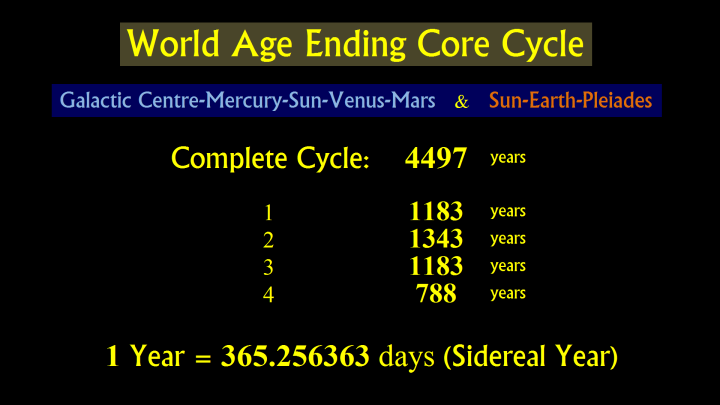 It is certainly well to appreciate that the movements of the heavenly bodies are very stable over the course time, and thus the noted pattern itself is achieved with surety and precision according to the above schedule. Being correctly placed in recent history, one may note that past instances of the alignment occurred within the following years:


Now it is a remarkable fact that various ancient cultures appear to have been fully cognisant of this alignment and its potential for earthbound destruction, being in possession of some rather esoteric calendar systems to target the configuration, as and when it occurred. Centuries or even millennia in advance.

In this regard one may point specifically to both the Mayan Long Count Calendar, and the Aztec Calendar Round. Both of these systems were designed to work in conjunction with one another to synchronise their units cycles with the occurrence of the alignment.

To understand just how this was achieved, one needs to understand in some detail the precise time intervals between instances of the configuration. This being in terms of an exact number of days.

For such an analysis, one needs to specify at the outset just what constitutes the optimum configuration itself. In this case, the most exacting standard would appear to be the alignment of Mars and Venus with the Sun, as opposed to all other relations.

Consider the following images that detail just this, specifically referencing the 3153 BC conjunction pattern, as historically established:

Above: Plan view of World Age Ending Alignment: 2 October 3153 BC

Below: From the centre of the sun looking towards the planets Mars and Venus; each aligned with the sun. The Earth itself is closely aligned to the Pleiades star group:

Below: From the viewpoint of Mars looking towards the galactic centre. Mars is seen aligned to Venus, the sun, and Mercury. In this instance, the alignment is refined so that Mars has the optimum conjunction specifically with Venus and the Sun. This is the time when the angular separation between the Sun and Venus is at its minimum. A close-up of this detail is also shown:

Below: A close-up of the above:

With one full World Age Cycle lasting 4497 sidereal years containing four distinct sub-intervals, one may note the precise dates and times of the configuration itself over a full cycle. Each instance of the conjunction pattern is optimised for the Mars-Venus-Sun aspect, as with the above case.

One may note the green column, second from right. This gives the all-important interval values in terms of days, as follows:


Refining the above values, rounding either up or down to achieve a whole number value of days, one then has the following:


Here then, one should note that these 4 intervals of time form the precise values that are the basis of the Mayan Long Count-Aztec Calendar round system. An ancient calendar that was actively used to target successive instances of the conjunction, as periodically established in accordance with these time cycles.

How the American Indians targeted ‘The End of the World’

Now as previously noted, one full cycle of the destructive pattern lasts some 4497 sidereal years. This being the full measure of time of all of the four sub-intervals added together:

It would be well to consider then just how the time cycles of the Long Count and the Calendar Round were actively used to map time over these intervals. To do this, one must first explain the mechanics of both systems, which on their face are very different.

A rather unusual calendar system used by the ancient Maya, the Long Count is composed of 5 interlocking time cycles, as follows:


As a readout, one may express the calendar in terms of 5 dials, which begin all set at zero, with the time cycles smallest to largest going from right to left:

The way the system works is that one would begin counting days, one day at a time, starting with the Kin column at the far right. After building up 19 days, one would then have the following:

On the 20th day, the Kin column is reset to zero, with one carried over:

After 359 days, the readout of the calendar is:

Following this same procedure, to achieve 1 Katun, and then 1 Baktun, one then has the following:

Working through the mechanism from the beginning, one can readily see then just how through repetition, one can build up more Baktuns.

This is essentially how the Long count was used by the ancient Maya.

This particular system, most notably associated with the Aztecs, is far simpler, and composed of only 2 interlocking time cycles. They are given as follows:

What creates or establishes a full Calendar Round measure is the resynchronisation of these two time cycles. In this case, if one begins to count them together, starting at the same time, this will be achieved after precisely 18980 days:

Here then, the Calendar Round is designed to repeat continuously in an unbroken fashion, without any additional adjustments made at the completion of each
Round, which are built up in number one after the other.

In light of mechanics of both the Long Count and the Calendar Round, it would be well to consider exactly how the ancient native Indians of the Americas used both of these calendars to map time. Specifically, between the Core World Age Ending Alignment of 3153 BC, and that of 1970 BC; being some 1183 years.

In this regard, the primary aim was to harmonise a whole number of Baktun units of 144000 days with the 1970 BC alignment. In this instance, precisely 3 Baktuns.

In contrast, the Calendar Round system, being only of secondary importance in covering this period, was deliberately established to fall just short of the key date of the conjunction pattern. This being important for targeting other future alignments of significance (as will be elaborated on in future essays).

To begin then, consider the total interval to be covered (Julian Calendar):

The first operation that the Ancient Maya made was to have a special count of exactly 96 days before they commenced counting the Long Count System:

Now it is important to realise that the Calendar Round does not itself begin at the same time as the Long Count. A significant delay is to be had before the second system ‘comes online’ so to speak. In this case, following a delay of precisely 2 Katuns:

Upon arriving at 10 June 3113 BC, the very next day, the Calendar Round commences. Exactly 22 Calendar Rounds are then completed in sequence, without pause:

Upon arriving at the date of 29 August 1970 BC, after 22 full rounds have been counted, the Calendar Round itself is then shut down, having reached fulfilment. In this case, 40 days short of the World Age ending alignment itself. At this point, the readout on the Long Count, which is still ongoing, is as follows:

+ 40 days more, and the day of the special alignment is then achieved =

This then is exactly how both the Long Count and the Calendar Round were used in conjunction to map time between instances of this special world age ending alignment, between 3153 BC and 1970 BC. This being just 1 of 4 of the intervals that comprise a full cycle of 4497 years.

Shortly after achieving the 1970 BC alignment date, significant changes were then made to both systems to set them up the target the next instance of the alignment in 627 BC.

In future essays, the full system will be revealed. However, it is well to know that between instances of the core alignment pattern, there are other variant destructive alignments that also occur. One of the most notable being what is commonly known as ‘Noah’s Flood.’

The next essay will deal with exactly this alignment, as is found to be intimately related to an additional calendar cycle employed by the native Indians of the Americas.