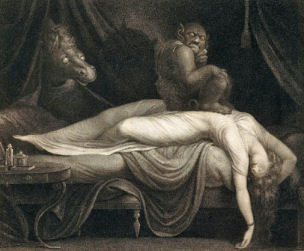 Given a list of Demon names i.e. The authentic names of the rulers of The Outer Darkness, one may invoke them to unravel their power over us.

Indeed, when Jesus stated that “There are many mansions in my father's house,” not only did he refer to ‘regions of goodness,’ but also ‘regions of torment.’

The Tyrants, Archons and Rulers Of The Ways Of The Midst; all such beings as detailed within such esoteric works as the Pistis Sophia or the Nag Hammadi texts, have a characteristic energetic signature as is natural to the domain that they inhabit.

Now certainly, whereas one may indeed suffer daemonic influences in life that one should seek to counter, one should always consider the possibility that such entities may have power over us in death.

Just how then might one go about countering such a threat?

In reviewing any given list of Demon names one needs to realise that pronunciation is everything. Even speech itself has a pattern. Let one consider the names and faces of the rulers of The Outer Darkness once more:

Were one upon death to find oneself trapped within the jaws of the Dragon of The Outer Darkness, one would be bound by these rulers. They indeed constitute the very prison that arrests the natural action of the soul. Yet who are these rulers exactly? Consider the words of Jesus from the Pistis Sophia concerning their character:

"The Outer Darkness is a great dragon, whose tail is in his mouth, outside the whole world and surrounding the whole world. And there are many regions of chastisement within it. There are twelve mighty chastisement-dungeons and a ruler is in every dungeon and the face of the rulers is different one from another."

"And the dragon of the Outer Darkness hath twelve authentic names on his doors, a name on every one of the doors of the dungeons. And these twelve names are different one from another; but the twelve are one in the other, so that he who speaketh one name, speaketh all. These then will I tell you at the expansion of the universe. Thus then is fashioned the Outer Darkness, – that is the dragon."

Now a mundane list of Demon names does not necessarily help one unless one understands the pronunciation and the pattern of power of such beings. With respect to the cited passages from the Pistis Sophia one should realise that the rulers of The Outer Darkness are not to be understood here as mere ‘personalities,’ so to speak. Indeed, the key statement one should lock onto is:

"And these twelve names are different one from another; but the twelve are one in the other, so that he who speaketh one name, speaketh all."

Herein we are speaking of harmonics with respect to energetic waveforms. Indeed, with musical instruments it is well known that when one produces a certain sound, one does not simply propagate necessarily a pure tone i.e. a single frequency. Rather, one triggers a very rich sound composed of a harmonic set of frequencies. The fundamental frequency is split up a whole number of times in cascading fashion to propagate the desired sound.

When it is stated that there are 12 rulers, each with a given name, with 12 names also on the doors of the dungeons, and that they are “one in the other;” one is referring to the unified nature of The Outer Darkness itself as a region. It is referring to the octave set, or rather the tones that define the region. The rulers should not therefore be understood here to be ‘characters’ such as kings, presidents, or prime ministers.

Rather, the list of Demon names hereby given define the very character of the ‘light realm’ that is The Outer Darkness. The solution then to the mystery of this region rests upon understanding the correct pronunciation of the names of the rulers that define the region itself.

Invoking or summoning a Demon is without doubt an incredibly dangerous activity – most certainly one that is not advisable. Now in consulting various sources on this matter one will doubtless realise the importance of Demon names with respect to the act of conjuring. Yet herein, it is not my intention to focus upon the issue of just how to actually summon a Demon per se, but rather upon how one might break the bonds of such a being over a soul that has tragically failed to find the mysteries of the light and been cast to The Outer Darkness.

The issue here then, is one of escape and salvation, for the souls of the damned.

Truly there are a series of actions that one can engage in during life; transgressions of an extreme type that poison the soul, corrupting its energetic pattern such that with the deterioration of the physical body upon death, that soul finds itself led inexorably to the dungeons of the Dragon.

A soul bound by the Dragon is frozen unless it knows the mystery of the dungeon that houses it. Herein, resonance is the key.

In the Bible Jesus conveys a Mystery wherein he states:

“No man can serve two masters: for either he will hate the one, and love the other; or else he will hold to the one, and despise the other. Ye cannot serve God and Mamōn.”

Now who indeed is Mamōn? In the Pistis Sophia one finds the answer, wherein Mary Magdalene herself offers the solution to the mystery of Mamōn:

'Make to yourselves a friend out of the Mamōn of unrighteousness, so that if ye remain behind, he may receive you into the everlasting tents.' Who then is the Mamōn of unrighteousness, if not The Dragon Of The Outer Darkness? This is the word: He who shall understand the mystery of one of the names of The Dragon Of The Outer Darkness, if he remaineth behind in The Outer Darkness or if he hath completed the circuits of the changes, and speaketh the name of the Dragon, he will be saved and go up out of the darkness and be received into the Treasury of the Light. This is the word, my Lord."

Clearly then the Mamōn of unrighteousness is The Outer Darkness. And to achieve salvation - in effect escape from the Dragon - one needs to know the name of at least one of the rulers. Speaking the name nullifies the power that the Dragon has over the soul trapped within its region. Indeed, possessing the full list of demon names is not required it would seem. One alone appears to suffice.

Now modern science itself is an aid to understanding this passage.

Resonance Within The Physical Sciences

In the physical sciences one may consider an object of certain dimensions that is impinged upon by an energetic waveform of some type. The classic example is that of a glass struck by sound waves of a particular frequency.

All physical objects possess a natural frequency that is tied in to the organisation of their structure. The very physical dimensions of an object define the natural frequency at work. Now all energetic waveforms propagate through a certain medium. Sound waves are a disturbance of air for example. Yet the frequency propagating will have its associated wavelength component. That is to say, the distance between successive peaks or successive troughs.

It is well known to the physical sciences that if one ‘hits’ a physical object of certain dimensions with an energetic frequency, whose wavelength fits a whole number of times within the dimensions of the object, then the object itself suffers resonant agitation. It begins to shake violently.

An opera singer hitting exactly the right frequency that is a match to the natural frequency of a glass is an example. If both the power of the waveform and the harmonic fit of the wavelength to the object is just right, then the target object will suffer catastrophic failure i.e. it will shatter.

There is no doubt that the words of Jesus touch upon the high physical science of resonance when he describes the souls of sinners freeing themselves from The Outer Darkness because they know the mystery of the rulers:

Heed these words then as one passes through life:

'Make to yourselves a friend out of the Mamōn of unrighteousness’